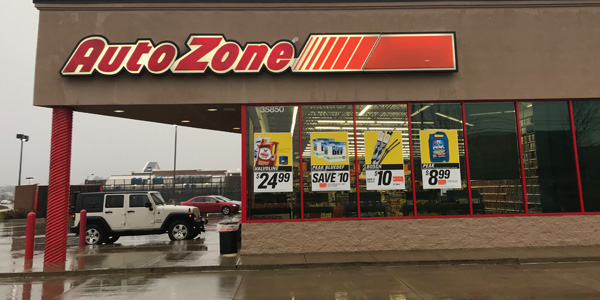 Inventory available was a major focus during the quarter.

AutoZone reported net sales of $2.6 billion for the first quarter of its fiscal 2019, buoyed by an 11.3 percent jump in its commercial business.

“As we entered the quarter, we knew we had difficult comparisons to last year’s first quarter due to the prior year’s sales benefit from three major hurricanes,” AutoZone Chairman and CEO Bill Rhodes said in a news release. “Our team delivered very solid performance in DIY, and our commercial growth accelerated again, reaching our highest growth since 2015.”

Net income for the quarter increased 25.1 percent to $351.4 million, while diluted earnings per share increased 34.7 percent to $13.47 per share. Tax reform helped boost both metrics, the company noted.

Inventory available was a major focus during the quarter. AutoZone opened two additional “megahubs,” and now has 26 megahubs and 170 hub stores for a total of 196 stores that have “significantly expanded parts assortments,” Rhodes said during the company’s first-quarter conference call.

Hub stores carry additional SKUs “that would not have been available locally in our network before,” Rhodes explained. Previously, AutoZone would ship harder-to-find or slower-moving SKUs to local markets based on demand.

“As we have seen both our DIY and commercial sales expand in markets where hubs and megahubs are added, we will continue to grow the number of hubs we have this year,” Rhodes said. “We expect to open as many as 10 hubs for the full year, with most being megahubs.”

Continuing to grow AutoZone’s commercial business will be a key priority for 2019, Rhodes noted.

“We’ve enhanced our inventory availability significantly in recent years, we have high-quality parts and products – many under the Duralast name – we have a seasoned sales force and now we are increasing the engagement of our local store team, particularly the store manager,” Rhodes said of the company’s commercial strategy. “We’re pleased with the results and the sequential improvement we’ve experienced over each of the last three quarters. We feel well-positioned to continue strong growth for the balance of the year.”

On the commercial side, AutoZone has been “investing in systems to help AutoZoners sell more efficiently and customers conduct business with us easier,” he noted.

“While most of these initiatives won’t be rolled out until late in calendar 2019, our focus on increasing the engagement of the broader store team and focusing on existing customers is really paying off,” Rhodes said during the conference call. “We have solid momentum heading into the new calendar year.

“Along with our usual program openings, we continue to improve our product assortments and availability, and as we make other refinements to our commercial offerings, we expect further sales growth.”

Advertisement
In this article:Aftermarket Parts, Distribution