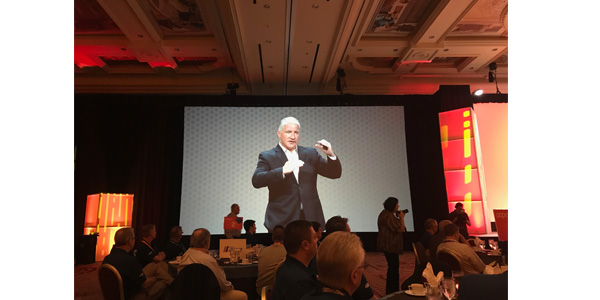 John King: “We are in the age of disruption. President Trump is not the cause, but the amplifier. There is a global divide over trade, immigration and way of life.”

CNN’s John King and political strategist Karl Rove shared their views on today’s midterm elections and how tariffs could impact the automotive aftermarket industry during the grand-opening keynote breakfast at AAPEX 2018 in Las Vegas.

King said the country is experiencing low unemployment and a booming economy, but there is national anxiety and both Democratic and Republican parties are facing an identity crisis. The midterm debate is about taxes and jobs, trade, health care, immigration and tweets and tone.

He added the great unknown is what will happen after the election, such as special counsel Robert Mueller’s next move, blue-wave subpoenas and if President Trump will be combative or bipartisan. King concluded, “We are in the age of disruption. President Trump is not the cause, but the amplifier. There is a global divide over trade, immigration and way of life.”

Rove predicted the midterm elections will be so close that the events of the next few days will have a big impact on the results. He largely agreed with King on election results and also spoke about the much-improved tax environment, low unemployment and the strong economy. He concurred with King on the uncertainty of the post-election landscape. Referring to President Trump, Rove said, “Who is going to show up in the Oval Office after the elections? We don’t know. We don’t know how he thinks and operates.”

According to Rove, the biggest issues facing a new Congress will be trade and tariffs. “It’s easy to start a trade war, it’s hard to have a winner,” said Rove. He emphasized the need for clarity on the goal of tariffs, including whether or not it is to protect intellectual-property rights. 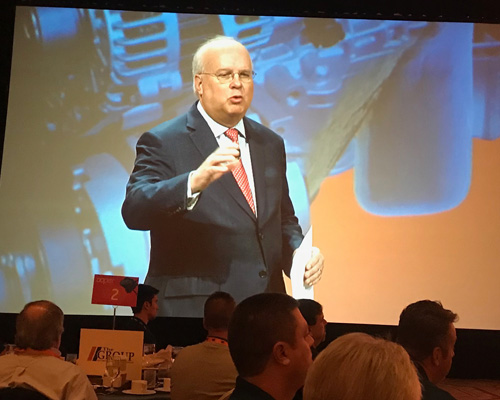 Political analyst Karl Rove on the big screen at AAPEX

In response to an audience question about how long should we expect the tariffs to continue, Rove said he has no idea, but added he worries about the impact on the economy and automotive aftermarket businesses. When asked if the imposed tariffs on steel are working, Rove said, “There are always winners and losers on tariffs. In my opinion, the steel tariffs are not working.”

When asked how the automotive aftermarket gets a seat at the table, Rove encouraged the audience to attend town-hall events and fundraisers, and invite members of Congress to their businesses. “Carve out time to be involved in political campaigns. Over time, it will have a huge impact,” he said.

The AAPEX grand-opening keynote breakfast took place Tuesday, Oct. 30, and was sponsored by Interstate Batteries. It also included a welcome from U.S. Sen. Dean Heller and a state of the automotive aftermarket industry address by Bill Hanvey, president and CEO of the Auto Care Association, and Bill Long, president and COO of the Automotive Aftermarket Suppliers Association (AASA). J.C. Washbish, director of marketing for the Aftermarket Auto Parts Alliance, introduced Rove to the AAPEX audience.

Hanvey and Long spoke about the tremendous transformation taking place in the automotive aftermarket, and encouraged audience members to become engaged in the industry and the political process. Both organizations offer legislative summits, with the 2019 MEMA Legislative Summit taking place April 30-May 1 in Washington, D.C., and the Auto Care Association Legislative Summit being held in conjunction with Fall Leadership Days, Sept. 18-20, also in Washington, D.C.

Events: PRT To Exhibit At The Group Conference And Expo

Events: Why Your Marketing Doesn’t Work As Well As You Think [Webinar]