MONROE, Mich. – From the countless smiles and “thumbs-up” signals from pedestrians and motorists to millions of views via Facebook, Twitter, Instagram and other digital media, the Monroe “Shockmobile” took the Northeastern U.S. by storm in June and is preparing to do the same throughout the Midwest as it brings the Monroe brand’s “Everything Gets Old. Even Your Shocks” message to consumers this summer and fall. 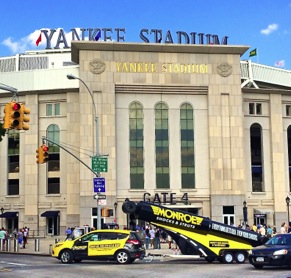 The Shockmobile is a 25-foot-long, 10-foot-high, translucent Monroe OESpectrum shock absorber that is visiting more than 50 North American cities in its initial year of operation. The custom-built, LED-illuminated shock is towed by a specially equipped sport-utility vehicle featuring matching yellow-and-black graphics along with information on how consumers can learn more about the importance of inspecting shocks and struts at 50,000 miles/80,000 kilometers.

The Shockmobile will begin its Midwest tour in mid-July, with visits to Detroit, Chicago, St. Louis and dozens of other cities. Consumers can track the tour via the Monroe brand’s Facebook page (www.facebook.com/MonroeShocks) and Twitter feed (@MonroeShocks) as well as the www.Monroe.com website.

Among the highlights of the first half of the Shockmobile’s summer tour were:
· Visiting New York’s Yankee Stadium as thousands of fans arrived for a game against the arch-rival Boston Red Sox;
· Participating in the Towson, Md., July 4th parade, seen by an estimated 60,000 people;
· Circling the Washington Monument, Lincoln and Jefferson memorials and other historic sites in Washington, D.C., during July 4th weekend;
· Navigating New York City’s busy Times Square and Herald Square, circling Central Park and even stopping for fan pictures in front of Tom’s Restaurant, made famous in the television sitcom “Seinfeld;”
· Pausing for fan photos at Niagara Falls; in Augusta, Maine; near Harvard Square in Cambridge, Mass.; in Ocean City, Md.; and outside of Citizens Bank Park, home of the Philadelphia Phillies.

“Our first three-week tour was a lot of fun as the Monroe ambassadors visited customers throughout the Northeast. It was also a real eye-opener for tens of thousands of consumers, many of whom reported how ‘shocking’ it was to see a 25-foot-long rolling shock absorber that glows in the dark,” said Denise Hanefeld, marketing coordinator for the Monroe brand. “Perhaps most important is the fact that our Web traffic at Monroe.com and follower engagement on each of our social media channels are growing substantially as a result of this consumer education initiative.”

The Shockmobile tour, which will include several popular college football venues this fall, is part of the Monroe brand’s comprehensive “Everything Gets Old. Even Your Shocks” marketing campaign, which is designed to remind millions of vehicle owners that ride control components – like other, more visible consumer products – wear out and need to be replaced. While ride control products aren’t as visible as many everyday consumer items, they play a crucial role in protecting drivers and passengers by helping to provide safe steering, stopping and stability.

To learn more about Monroe products and the safety-critical role of automotive ride control components, visit your local parts and/or service provider or visit www.Monroe.com.