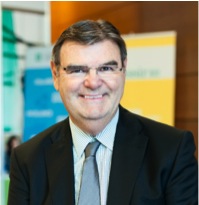 Landreville served as president and CEO of Uni-Select from 1991 through 2007, when he was succeeded by Richard Roy. Roy took over leadership on Jan. 1, 2008, and Landreville remained a member of the board, acting also as a special adviser to the president.

He also previously served as the general manager of A. Lassonde Inc. as a member of the board of directors of Lassonde Industries Inc. Among his many honors and achievements, he was named Bâtisseur by Commerce magazine in 1993, and received the Diplômé HEC émerite award in 1997. He also was a finalist for the best CEO in Quebec in 2004.

Landreville was born in St. Henri, a suburb of Montreal and completed his bachelor’s degree at the Hautes Études Commerciales (HEC)  of Montréal. He also obtained his MBA degree at the Université de Sherbrooke, Pre Doctorat degree at I.N.S.E.A.D., Fontainebleau, France, Harvard Business School.

Following an academic career as a professor at the Université du Quebec in Chicoutimi and as head of the MBA at the Université de Sherbrooke, Landreville  then oriented his career as an executive of many industries in the private sector. His professional career began atHumpty-Dumpty Foods from 1977 to 1985, he then joined Lassonde Industries, followed by Culinar in 1987. Landreville sat on a number of boards in addition to Uni-Select and Lassonde Industries, including as chairman of the board of Colabor Investment Funds Inc., Opmedic, GLV and Camoplast.

Landreville is survived by his wife Cécile and son Antoine.