MCHENRY, Ill. — For Matt Kenseth, Sunday’s forecast was cloudy with a chance for reigning triumph. He captured his fourth victory of the season in Sunday’s rain delayed NASCAR Sprint Cup Series Quaker State 400 at Kentucky Speedway. 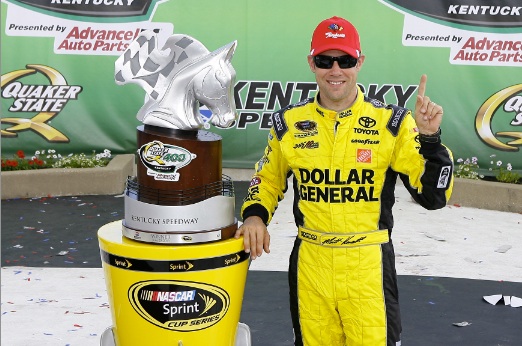 Kenseth drove his No. 20 Dollar General Toyota to victory lane under the stopping power of Raybestos brakes. He got the lead by taking no tires during a pit stop on Lap 242, and captured the 28th victory of his NASCAR Sprint Cup Series career.

“I made the call for a fuel only stop while many other leaders took at least two tires,” said Jason Ratcliff, Crew Chief of Kenseth’s No. 20 Dollar General Toyota. The strategy worked, as it allowed Kenseth to restart first alongside Jimmie Johnson, the day’s lap leader. “Matt was able to fight off a hard charge by McMurray near the end,” said Ratcliff. “He gave it everything he had and he brought it home.”

Despite a variety of weather-induced challenges, teammate Kyle Busch and the Doublemint team managed to capture a strong fifth-place run.

Raybestos Racing calipers make up the strongest and lightest caliper package currently available in all of NASCAR, the company says. They have an optimized structure caliper architecture design and a mono-block aluminum alloy construction. They also include integral crossover cooling and progressively sized titanium pistons.

The lessons learned on tracks like Kentucky are continually translated into product improvements across the entire Raybestos product line, which includes racing, street performance, police patrol/pursuit vehicles and heavy-duty trucks.

For more information on the Raybestos Sprint Cup braking system, or for questions on any Raybestos brand brakes, visit www.RaybestosBrakes.com or call 800-323-0354.