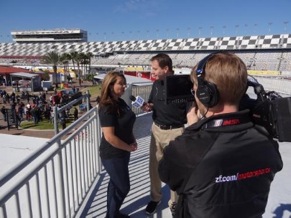 NORTHVILLE, Mich. – ZF Friedrichshafen AG has become an official series partner of the TUDOR United SportsCar Championship for the 2014 season. This North American race series features 12 races throughout the United States and Canada.

The new, multi-year partnership with the TUDOR Championship series enables ZF to focus their North American motorsports efforts toward the further development of the new sports car series, helping establish a firm presence and increased awareness of the ZF brand in North America.

According to the company, several teams in the TUDOR Championship are already using ZF racing clutch systems and ZF dampers, as well as benefitting from ZF’s trackside technical support, including Audi, Aston Martin, Ferrari, Porsche and many of the Daytona prototype entries.

ZF says it also will use the TUDOR Championship affiliation to bring its unique Race Reporter program to North America. The series of social media video programs, established in the Deutsche Tourenwagen Masters (DTM) in 2012 and Japan’s Super GT Series this last year, invites motorsports fans behind-the-scenes for glimpses of the racing series. Fans have the opportunity to experience the real excitement of racing while also gaining an understanding of how ZF’s products contribute to racing teams’ on-track success and how that technology translates to production vehicles.

“Around the globe, many renowned racing teams and car manufacturers have relied on ZF’s innovative technologies and first-class service to help them win – from the top Formula 1 teams, DTM competitors to the World Rally Championship and the 24 Hours of Le Mans,” said Dr. Stefan Sommer, CEO of ZF Friedrichshafen AG. “The new TUDOR United SportsCar Championship series fuses elements of DTM and Super GT, opening up an international growth perspective for worldwide sports car racing. It is the perfect stage for us to demonstrate the technical excellence of ZF products.”

“Today’s announcement of ZF’s investment in IMSA and the TUDOR Championship is particularly gratifying as it is the first example of a new corporate partnership that is a result of the merger,” said Scott Atherton, IMSA president and chief operating officer. “We have spoken to ZF before, but it was the unification of sports car racing that caught their attention and brought us together. We are honored that ZF has entrusted us with the opportunity to help them build their brand’s awareness across North America. ZF has been a major provider of leading drivetrain technology for over 100 years and we look forward to working with them to jointly build the TUDOR Championship and the awareness of the ZF brand. Today marks the beginning of what we hope will be a long and mutually beneficial collaboration.”

ZF’s Race Reporter program, which has previously taken fans behind the scenes in Germany and Japan, comes to the United States for the 2014 inaugural TUDOR Championship series. The ZF Race Reporter, Tony Rizzuti, will film videos at select racetracks providing unique insights, expert opinion and engineering features for motorsports fans. The Race Reporter videos will be available at zf.com/motorsports, the TUDOR Championship website and ZF’s social media channels.

The ZF Fan Reporter will bring a different TUDOR Championship race fan behind the scenes at select races to ask questions and gain insight from the racing insiders. By submitting a motorsports-related question tozf.com/motorsports, each winning Fan Reporter will ask his or her question on camera, win race passes, travel and accommodations and a VIP track experience (with a guest).