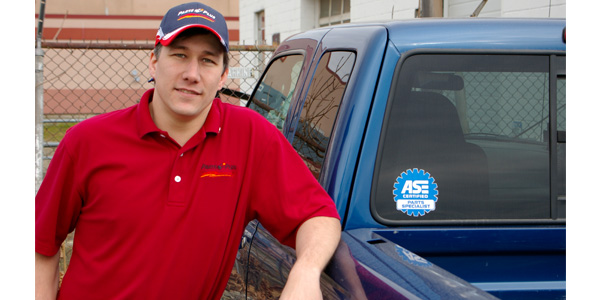 Owning a 1979 Chevy Nova was the catalyst for Tom Dayton to become a parts professional.

Editor’s note: In the spirit of “Throwback Thursday,” Counterman is firing up the time machine and setting the coordinates for 2009. This feature article by former Counterman Editor Mark Phillips was the cover story in the December 2009 issue.

If you ever want to know Thomas Dayton’s level of dedication to automotive aftermarket parts distribution, just drive behind his pickup truck or send him an email.

Sure, there’s a large blue ASE sticker on the driver’s-side rear window. But look a little lower and you’ll find his license plate: “ASE P2.” And then there’s his email address. It has “ase_p2” in it.

Dayton, the assistant manager of J S Auto Supply in Jamestown, New York, is Counterman magazine’s 2009 Counter Professional of the Year, sponsored by Affinia, Wix and Raybestos Brake & Chassis. In early November, he and his wife, Jessica, received an all-expenses paid trip to the AAPEX show in Las Vegas, where he received his award at the Automotive Warehouse Distributors Association recognition luncheon.

Dayton first got into parts as a profession in 1996, due in part to his ownership, at the time, of a 1979 Chevy Nova. “Like anyone with a 1979 Nova, I also spent a lot of time at my local parts store,” he recalls in his entry for the Counter Professional of the Year award. “Neither the Nova nor the college tuition proved to be very wise investments, and I soon found myself printing invoices at that parts store, instead of just paying them.”

It didn’t take long for Dayton to feel right at home, he remembers.

“I knew I liked the business,” he recalls. “I like the technical aspects of it and as cheesy as it may sound, I enjoyed helping people and using my brain. I’m self-taught in a lot of what I know. It’s about needing to find an answer. I’m trying to learn as much as I can.”

Dayton has been with J S Auto Supply for three years. Jamestown, New York, a city of about 30,000 people, is surrounded by smaller rural villages and towns. The store employs four full-time counter people, an outside salesman and nine part-time drivers. The store serves customers in an approximate 30-mile radius, and the mix of commercial vs. retail clients is about 80-20.

“I’m not just selling coil springs. I’m selling knowledge,” Dayton says. “Our professional-technician customers may not need it that much, obviously, but for other people who come in here, I hope I can be of help.”

Dayton originally attended Cornell University in Ithaca, New York, and spent three years pursuing a degree in natural-resources management. “I was going to be a forest ranger,” he recalls, but he changed his mind and instead co-owned a dairy farm for a time.

This fall, he began taking distance-learning courses at Alfred State College, at his wife’s urging. He devotes at least 20 hours per week to his Alfred State studies in addition to working a full schedule at J S Auto Supply. “It always kind of bothered me that I didn’t finish my degree,” he said. “My wife encouraged me. I think if I was going to go back and get a degree, it should be in something I enjoy.”

Dayton believes counter professionals must further their education not only to stay up to date with training, but also to bolster the reputation among the general public and technicians.

“You can find well-educated, well-staffed parts stores everywhere,” he said. “But not all parts stores out there meet those criteria. If a customer has a bad experience with someone who doesn’t know what they’re doing, it affects all of us.” 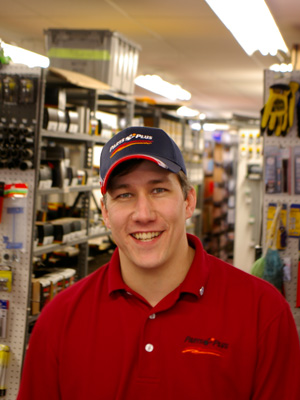 Dayton participates in as many online training courses as possible. He also attends at least three manufacturer’s technical training seminars each year. “I am constantly ‘in training,’ as I discover new sources of information and knowledge. I look at it as an investment in my career,” he wrote in his essay submitted for the award.

His professor at Alfred State, Jerry Ives, was a 2002 Counter Professional of the Year recipient. Dayton had become very familiar with Alfred State, because, in addition to having grown up in the area, he serviced the school’s repair-shop program by providing parts to the school’s on-campus jobber store. Ives believes Dayton is very deserving of the recognition he is receiving.

“It’s great having Tom as a student,” said Ives, who is an assistant professional in the school’s parts technology department.

“He’s that certain type of individual our industry needs; someone who is dedicated and willing to continue his education to help develop the skills and knowledge to meet the challenges in an ever-changing industry.”

Dan Backus, owner of J S Auto Supply, says Dayton’s drive and attention to detail are invaluable and are essential to running a store well. “Tom does a great job,” Backus said. “All I have to say is, ‘Hey, I’m leaving,’ and he takes over. And I don’t have to worry about a thing. That’s all any business owner could ever ask for.”

Curt Burdick, who hired Dayton at another parts store, said, “I hired him to work for me because I liked his demeanor. You knew he was something special.

“I always knew his hard work would pay big dividends.”

Advertisement
In this article:ASE P2, Counter Professional Of The Year, Parts Plus