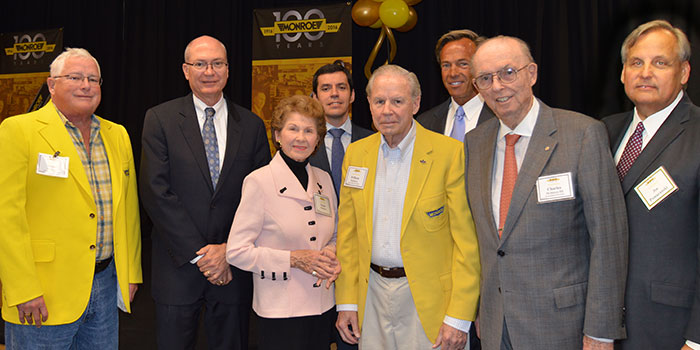 “Today is a celebration of the innovation and passion for excellence that have made Monroe a leading global brand over the past century and which will drive its continued growth over the next 100 years,” Tenneco Chairman and CEO Gregg Sherrill told the audience. “This is one of the elite industry brands that defines its category, particularly in the minds of automotive service professionals who each day choose Monroe products to help deliver a superior driving experience for their customers.”

The brand’s origins date back to 1916, when Meyer established a tire pump manufacturing company in Monroe, Mich. He soon formed a partnership with McIntyre, a local automobile dealer. The company in 1919 was renamed Monroe Automobile Equipment Manufacturing Company (later shortened to Monroe Auto Equipment Company).

It wasn’t until 1926, with demand for tire pumps having peaked, that the partners developed their first shock absorber, the Monroe Shock Eliminator, which was based largely on the single-barrel tire pump. The company invented the first double-action shock in 1929 and by 1933 was a leading supplier to Detroit-based vehicle manufacturers. Monroe introduced shocks for railroad passenger cars in 1938 and by 1951 had become one of North America’s leading suppliers of shock absorbers both to vehicle manufacturers and the aftermarket.

“One of the hallmarks of great companies and brands is their ability to anticipate and address emerging challenges and opportunities,” said Jeff Koviak, vice president and general manager, North America aftermarket, Tenneco. “The shift to ride control in 1926 is a perfect example of this, as were our investment in products and programs to serve the growing aftermarket beginning in the 1950s; Tenneco’s expansion into the strut category in the early 1980s; and our development of complete strut assemblies in 2003.”

Tenneco, which acquired Monroe Auto Equipment Co. in 1977, has continued this heritage of innovation, re-investment, and customer service excellence. The company today operates 15 world-class engineering centers across five continents and serves the world’s leading OE manufacturers and replacement parts distributors and retailers. Monroe is the predominant brand of replacement ride control products in North America, South America and Europe and has established a strong foundation for growth in China, India and other markets.

“Tenneco’s aftermarket leadership is based on our ability to help our channel partners grow through exceptional product quality and performance, industry-best marketing and customer service,” said Joe Pomaranski, senior vice president and general manager, global aftermarket. “Always remain close to your customer – the same core belief of our founders is still central to our success today.”

Those attending the 100th anniversary celebration also had the opportunity to learn about several of the latest Tenneco and Monroe brand innovations for the original equipment and replacement markets. These included the OE-focused Monroe® Intelligent Suspension portfolio, which comprises adaptive, semi-active and active suspension solutions, serving all vehicle segments.

Tenneco is an $8.2 billion global manufacturing company with headquarters in Lake Forest, Illinois and approximately 30,000 employees worldwide. Tenneco is one of the world’s largest designers, manufacturers and marketers of clean air and ride performance products and systems for automotive and commercial vehicle original equipment markets and the aftermarket. Tenneco’s principal brand names are Monroe, Walker, XNOx and Clevite Elastomer.