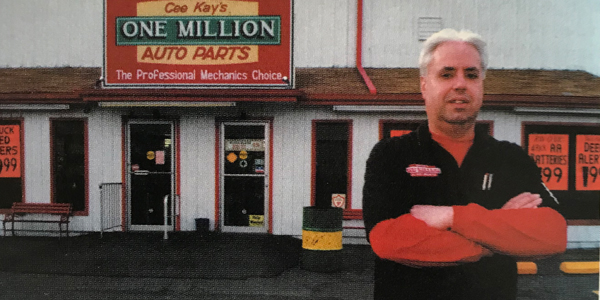 In the face of a snowstorm, Shampack once borrowed a four-wheel-drive vehicle, left the safety of his home and opened his parts store to ensure that emergency vehicles could get any needed parts.

Editor’s note: In the spirit of “Throwback Thursday,” Counterman is firing up the time machine and setting the coordinates for 1999. This feature article by Vicky Poulsen was the cover story in the December 1999 issue.

When John M. Shampack was 16, he told his mother he wanted a career in the automotive service industry. In bewilderment, she asked, “Is this something you really want to do, John?”

“People will have to move,” says the 48-year-old Shampack of Laflin, Pennsylvania, “and no matter what they move in, I wanted to be a part of it.”

Now, 32 years later, his mother can be proud of a son who has led a successful career in the automotive service industry and made a name for himself in the replacement-parts business as well.

For more than a decade, Counterman Magazine has been honoring a single professional parts specialist who sets the standard for professional knowledge, dedication and customer service.

“I couldn’t believe I had won and was sort of embarrassed because I didn’t feel I had done anything fantastic,” says Shampack. “I wasn’t looking for anyone to come up to me and say, ‘You’re the greatest thing since sliced bread.’ I’ve just always devoted my life to my job, family and friends and will continue to do so. Everything I do just comes naturally.”

But it’s what Shampack has done in the off-hours that caught the eye of this year’s Counterperson of the Year judges.

In the face of a snowstorm, recalled Shampack’s wife, Barbara, he once borrowed a four-wheel-drive vehicle, left the safety of his home and opened his Moosic parts store to ensure that emergency vehicles could get any needed parts.

“It was probably one of the worst snowstorms in 10 years,” recalls Shampack. “Businesses were closed and there was a ban preventing anyone from traveling.

“But I knew there would be salt trucks, police and other municipal-issued vehicles that were going to be in need of parts. They’ve always come to me in the past, and I wanted to be there for them now.”

So, Shampack notified municipal officials that he and another employee were opening the store.

“We saw mostly city trucks whose hoses and wiper blades were really taking a beating from the weather,” says Shampack. But when temperatures started to rise a few days later, Northeastern Pennsylvania braced itself for another weather emergency.

“We had a lot of rain and then a terrible warm-up – two ingredients that added to a potential disaster with all that leftover snow.”

With a major flood on the horizon, the Pennsylvania governor declared a state of emergency. Again, Shampack stood firm and kept the store open throughout the night to provide parts for vehicles assisting with emergency operations.

“We also went in and moved as much of our electrical equipment and merchandise out of harm’s way as we could. As a further measure, we offered to help evacuate our customers if they needed help – thus, my philosophy to do everything I can for my customers.”

“It was tough to make a selection this year,” says Counterman Managing Editor Kurt Kuster. “We had a lot of very qualified candidates. Shampack’s certifications and credentials were impressive, but it was his dedication to the job, his customers and his community that swayed my vote.”

Counterman Publisher Kathleen Schmatz echoed Kuster’s comments and added: “Mr. Shampack is yet another reason why professional parts specialists throughout the industry are vital to the aftermarket. They form that critical link between manufacturers and professional technicians.”

Cindy Landolt, Cee-Kay Automotive general manager, has known Shampack for about 20 years. And in that time, she has come to appreciate his constant “yearning for learning.”

“Johnson is my thinker – the person who keeps up and is constantly trying to gain knowledge on all new things,” says Landolt. “When a new catalog comes out, he actually reads it instead of putting it on the rack. Whenever there is a difficult issue, he’s the one to say, ‘This is what we do.’”

Landolt says Shampack is always taking technical journals and trade magazines home to read. “For John, this is definitely not just a job. It’s a way of life.”

Jack of All Trades

“Being a former technician is the best background to have in his job,” says Landolt, whose Moosic store services a 60-percent wholesale customer base. “Having someone who can walk the walk and talk the talk with our garage customers is definitely a feather in our cap.”

“There’s nothing in the automotive business that I can’t do,” says Shampack, who helped move a dealership’s entire service department to its new location in one weekend, enabling the dealership to open for business Monday morning.

“I could walk into any dealership and do any job, whether it be comptroller or mechanic,” says Shampack, who opened his first garage after graduating from high school.

To help with the financial end of business, he even earned an associate’s degree in accounting and business administration from a local community college, and then furthered his education by completing an extensive list of service classes, clinics and seminars.

Over the past 32 years, he also has held roles as a service advisor and service manager in new vehicle dealerships.

“I need to know how everything works,” he says. Shampack also has helped several service departments improve their garages. “I like my customers to know I may be strong in the parts area, but even stronger in service.”

“John’s knowledge of parts gives him a definite advantage over a counterman who just knows numbers and where to find a part on the shelf,” says Ron Roberts, owner of Ron’s Auto Service. “Everyone is treaded with respect, and he is always read with a helpful answer to any question.”

“My customer-service philosophy is really quite simple,” says Shampack. “I have, and always will, go out of my way to service my customers with the product they need, when they need it. I will always be there to answer their questions. They know my word is as good as gold, delivering to them what is needed, when it’s needed.

“I’ve always prided myself for being straightforward with my customers. The No. 1 thing I strive for is to be honest and tell people exactly the way it is.”

“We weren’t trying to drum up a lot of business,” adds Shampack. It was just our way of saying, ‘Thank you.’”

Shampack’s obvious commitment to his community goes beyond the walls of Cee-Kay Automotive. The Make-a-Wish Foundation, Toys for Tots and Little Leage have recognized him for his volunteer and fundraising efforts.

“John’s attitude toward customers and friends alike is one of making you feel as though you have known him all your life,” says Roberts. “Everyone is treated with respect and a helpful answer to any question. I would be proud to see him honored with a prestigious award. He deservers all the accolades.”

Advertisement
In this article:AAPEX, Counter Professional Of The Year