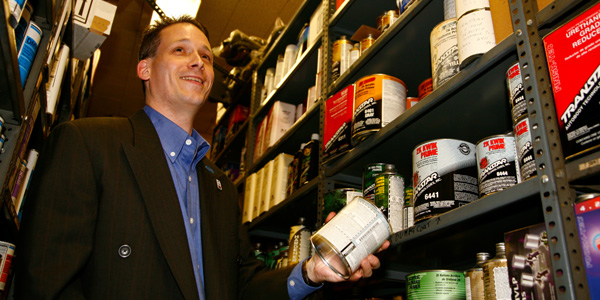 Mirroring the values of his father and uncles, Steinberg has brought significant changes to Morris Auto Parts, allowing it to thrive in the modern world.

Editor’s note: In the spirit of “Throwback Thursday,” Counterman is firing up the time machine and setting the coordinates for 2006. This feature article by former Counterman Managing Editor Arianne Anderson was the cover story in the December 2006 issue.

On a particularly cold, snowy night in North Philadelphia, Harris Steinberg was at the counter doing what he does best – helping customers. Come first light the following morning, he was opening his doors. He had slept that night at the store, covering himself with his employees’ sweatshirts and flannels to keep warm. He knew that his customers, that day more than most, would need him.

As Steinberg sees it, this kind of dedication just comes with the job. The staff at Counterman sees this dedication worthy of recognition, and that’s just one of many reasons why Steinberg was named the 2006 Counter Professional of the Year, presented by WIX Filters. As owner of Morris Auto Parts in Philadelphia, Steinberg possesses all the qualities of an outstanding professional who values his profession and the people who make it all possible – his family, employees and customers.

Founded in 1922 by Steinberg’s uncle, Morris Auto Parts has become a recognizable landmark in the community. Almost 85 years later, it’s still the first source people go to when looking for quality parts. Steinberg has seen firsthand how Morris Auto Parts has grown with the times, because he literally grew up with the store. As a boy, Steinberg, along with other family members, helped his father and uncles run the store. His main tasks were sweeping, stocking shelves and answering phones, which were too high for him to reach without climbing up on the counter.

While at Albright College, working toward a degree in Business Administration and Finance, Steinberg commuted back and forth from school to help with the store and to earn a little pocket money. He recalls hearing a story about when the Great Depression hit and his father, then in his late teens, still had pocket money because of his unrelenting dedication to the business he ran with his brother. But earning money was certainly not the only motivation for Steinberg’s involvement with the business – there was a family need. His 76-year-old father’s health was declining.

“It was a one-and-a-half-hour ride one way and many mornings I awoke after just a few hours of sleep to hit the road to open the doors at the store. Many nights making the trek back to Albright College, I would have to pull over to avoid falling asleep at the wheel,” Steinberg said. “But I loved my dad and would do anything for him.”

His dad eventually passed away in 1988 and it was only natural for Steinberg to take over the business in 1989. In fact, the morning after the funeral, Steinberg made sure he was there to open the store for customers.

“This business has a lot of sentimental value and I feel like I must carry the torch and carry it high, or all of my family’s efforts would be for nothing,” Steinberg explained. And carry the torch high he does.

Changing with the Times

Mirroring the values of his father and uncles, Steinberg has brought significant changes to Morris Auto Parts, allowing it to thrive in the modern world. A strong belief in continuous training and education has solidified the store’s success. Only nine parts distributors in the U.S. have obtained the ASE Blue Seal of recognition, and Morris Auto Parts is one of them.

This recognition is important to Steinberg because, “It promotes training, knowledge and professionalism. It feeds right into our mission statement: ‘Service our customers through professional employees who have the technical and logistical knowledge to get the right product, delivered in the shortest possible time, in order to create the highest profit for our customers on each and every purchase,’” he said. 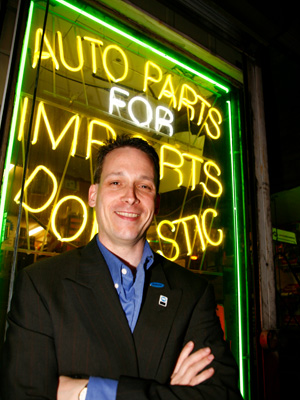 Steinberg feels so strongly about having the best possible employees on his team that a mock ASE or Paint Specialist test is administered to those applying for a job. Right off the bat, applicants know that Morris Auto Parts means business. As motivation, Steinberg rewards employees with $2,500 for each ASE test passed. Other compensation incentives are also offered to employees for attending continuing education courses.

“If they don’t train, they don’t take home as much and they have little chance of advancement,” Steinberg explained.

Tom Davis, a two-year employee at Morris Auto Parts said, “Harris encourages initiative. He encourages it and funds it – that’s unusual. He trusts employees and encourages employees’ ideas. We are lucky to work in an environment of progressive improvements.”

Pete Rivera, an employee for almost nine years, agrees with Davis: “He’s the type of boss who wants you to know all you can about your job. He’s very honest about your strengths and weaknesses.” Steinberg also is a compassionate and understanding boss when it comes to his employees. “I have a son with special needs and Harris lets me leave early when I have to take my son to doctor’s appointments and he understands if I need the day off,” Rivera said.

This continued effort to encourage his employees to learn as much as they can wouldn’t be as effective if Steinberg didn’t lead by example. Serving as an ongoing student of the industry, Steinberg not only belongs to a number of associations, but takes a leadership role in them as well.

Serving as vice president of the Pennsylvania Automotive Wholesaler’s Association (PAWA), he encourages his peers to get involved in an effort to “have a say in politics and keep an eye on legislation that might affect our livelihood, and have the lines of communication well established to react to any of these issues quickly,” he said. Steinberg is also the VP of the MidAtlantic Automotive Aftermarket Association (MAAA), a conglomeration of PAWA and the New Jersey Automotive Wholesale Association.

The group that Steinberg is most heavily involved in is POJA Warehouse, consisting of independent wholesale and retail warehouse distributors in New Jersey, Delaware and Pennsylvania. It was formed 10 years ago in response to the growing competition from larger chain operations and from the notion that manufacturers were taking the independent wholesale/distributor business for granted.

“We [POJA] leverage our buying and marketing powers, as well as share an incredible amount of experiences with each other,” said Steinberg, who also is POJA’s vice president. “We all talk multiple times a day. Without POJA, I would have made many costly mistakes.”

Morris Auto Parts is a true independent, and doesn’t belong to a national program group. However, Steinberg feels that POJA provides many of, if not more than, the advantages normally attributed to the national groups.

“We [POJA] have a membership in Aim/CMB as well as APA, which gives us some rebates and access to some lines. We are also affiliated through other WDs with the Automotive Distribution Network (IAPA and Parts Plus), but we have no say in the program,” Steinberg said. “When it comes down to it, Counterman Publisher Jon Owens wrote in an editorial: ‘In the long run, the most efficient operating system will win. Period. End of story.’ All that fluff with programs is nice, but they need the right parts, at the right price delivered immediately,” he continued. “So, as a distributor that has spent a lot of time trying to promote the programs of the program groups, I have decided that my time is better spent working on what the customer wants, not what the program groups think he needs.” 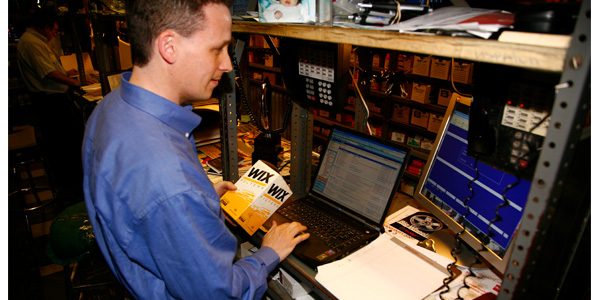 To stay competitive in the market, understanding technology and its value is critical – and expensive. Steinberg knew this early on, and during his “free time” in college he computerized the payroll system at the store. This was a good start, but much more was needed as time went on. Tracking efficiency, productivity and managing better customer service is a priority for him, as well as measuring employee performance and tracking employee incentives. With POJA coming together to increase buying power, Morris Auto Parts was able to use Activant, a software solutions company, to address many technological issues. Lowell Lysinger, former field engineer with Activant for 26 years, said, “Harris’ dedication to customer satisfaction is in the forefront of all areas of Morris Auto Parts. It is great to have him recognized for his hard work and innovation.”

Keeping up with the changing technologies is key to running an efficient business, but “being good at seeking out answers through all resources available, including other counter professionals and associations like POJA is also important,” Steinberg said. One can have the most high-tech systems in place and still not be successful. There has to be someone behind it all, a person such as Steinberg who says that, “Change comes daily from our marketplace and as smaller ships we must use our advantage to change course quickly to out-maneuver the competition.”

Steinberg often hears people say that the business isn’t what it used to be and that they wouldn’t want their kids getting in the business. That’s true of some stores, but that’s certainly not the case with Morris Auto Parts. It’s had a great run for almost 85 years and it’s set up to continue on that same path. With the help of his dedicated staff, wife and two kids, Steinberg said, “We can push the business as far as our imaginations will take us.”

To submit a nomination for the 2019 Counter Professional of the Year award, click here.

Advertisement
In this article:Counter Professional Of The Year, WIX Filters