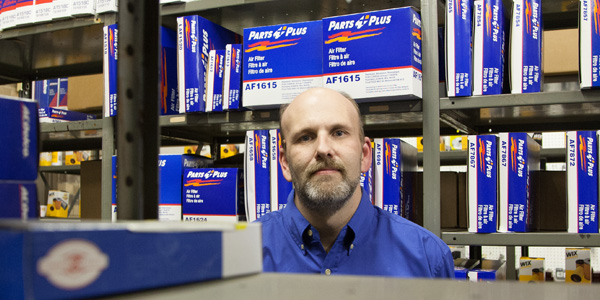 Flowers manages by the rule, “It’s easier to catch flies with honey than with vinegar.”

Editor’s note: In the spirit of “Throwback Thursday,” Counterman is firing up the time machine and setting the coordinates for 2007. This feature article by former Counterman Managing Editor Adrianne Hendricks was the cover story in the December 2007 issue.

Scott Flowers’ wise grandfather once said, “Live by your word because that’s the only thing you have in this world. If you lie, no one will trust you. But if you tell the truth, they’ll always be there for you.”

Flowers, the winners of Counterman’s 2007 Counter Professional of the Year, has made his grandfather’s quote the philosophy by which he lives, and it has brought him much success.

The customers of Auto Supply Co. in Hickory, North Carolina, know they can rely on Flowers, a tall Southerner with a long drawl and big smile.

“Scott knows how to pleasantly and correctly handle customers, whether they’re right or wrong,” said Delbert Fowler, owner of Longview Automotive. “It’s his correctness in getting the right part the first time and his efficiency that make him an asset to my company. His excellent service makes my service better.”

In fact, Auto Supply Co., an Automotive Distribution/Parts Plus member WD and ACDelco DDG, touts the motto, “The Home of Great Service,” and Flowers delivers it every time. Not only does he have extensive knowledge of the parts industry and hands-on experience, but Flowers has a genuine care for his customers.

“Sometimes you just have to listen, even when you’re busy,” Flowers said. “I’d like to think that my customers know that they can call me up when they’re havin’ a bad day.”

Flowers first became interested in the parts industry as a teenager working at Hickory Auto Parts. He was a driver and worked in the warehouse, saving up money to buy parts and accessories for hot rods that he loved to tinker with. Flowers soon realized he had a knack for not only working on cars, but interacting with customers too.

“My customers actually taught me things I didn’t know, which not only increased my knowledge about parts, but increased my interest in parts as well,” he said.

The interest prompted him to attend Catawba Valley Community College, where he completed two years of automotive technician courses as he continued to work at the store. He remained at Hickory Auto, which was eventually bought out by Carquest, until 1994, when he joined the Auto Supply Co. team. 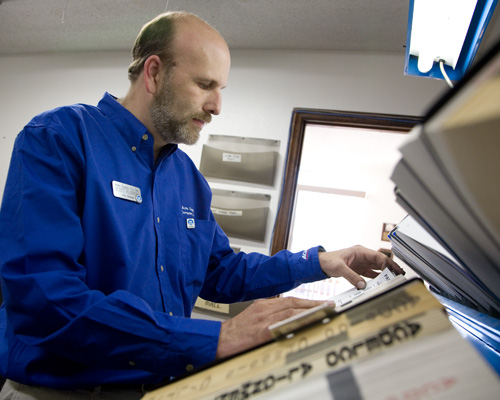 Beginning as a counterman, Flowers worked his way up to his current position as assistant manager. He said he manages by the rule, “It’s easier to catch flies with honey than with vinegar.” The result of this management style is that everyone works together on the same level to deliver the top-of-the-line service the warehouse hub promises.

“There are plenty of parts stores, but they may not give you the customer service you’re looking for. The price isn’t always what’s going to get you the sale,” Flowers said. “We all have the same wants and desires for the business. If we can’t help a customer, we’re upset.”

It’s a rare occasion that a customer doesn’t get the parts he needs. With an educated crew like the one at Auto Supply Co., there are plenty of knowledgeable sources to find the right parts fast. Flowers, who often uses vacation days to attend automotive classes, is ASE and HAZMAT certified, and he has attended a host of various seminars with topics ranging from batteries to brakes, ignitions and air conditioning. In addition, he’s completed numerous ACDelco training classes and Parts Plus courses. Flowers’ continuing education also includes staying current with changing technologies.

“Our business changes from day to day, sometimes hour to hour. Technology is our future,” he said. “There are too many part stores that were here 20 years ago that aren’t around anymore. You have to keep up or you’re going to go out of business.”

Auto Supply Co. has certainly kept up, as it has 19 branch locations and two DCs throughout North Carolina and Western Virginia.

While Flowers is an advocate of technology, he gladly admits that he’s old-fashioned. He believes that “a computer will make a parts person, but a catalog will make a great parts person.” He acknowledges that young people entering the industry must have extensive knowledge of computers to be successful, but emphasizes that more importantly, they must have a passion for the industry.

“It’s a struggle to attract young people to our industry,” he said, “but if they’re passionate and work hard, they can make a decent living.”

No one would dispute the fact that Flowers is passionate about the parts industry. He has catalogs that date back to the 1930s because he said there are still old cars out there that need parts that can’t be found in an electronic catalog. And, old or new, he’s always thinking about parts. After working a full day at Auto Supply Co., Flowers works a second job fixing cars with a neighbor. Doing this most nights allows Flowers to be on the same level as his customers.

“When I work at night, I don’t have the luxury of calling back up and saying, ‘Hey, you sent me the wrong part,’” Flowers said. “I have to be sure I looked up the part correctly in the first place. I want to do the same for my customers.” 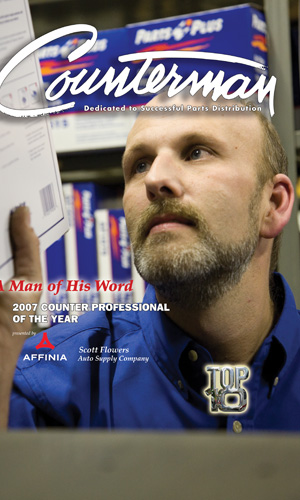 The cover of the December 2007 edition of Counterman

Quite often, members of the community will throw Flowers their car keys and say, “Fix it.” They know he’ll get the job done and he’ll do it honestly and correctly. Safety, Flowers said, is his main concern for his customers at both jobs. If Flowers wouldn’t put the part on his own car, he’s not going to sell the part or install it in his customer’s car.

He’s concerned about the influx of import product lines and their poor quality, but he’s also concerned that a lot of people are getting the impression that all imports are cheap.

“One of the biggest challenges this industry is facing is the amount of inferior parts we’re seeing. It’s undermining the quality parts business,” he said. “We have to continually educate our customers that all parts made in China aren’t bad. ACDelco, for example, has quality standards, and if those quality standards aren’t met, ACDelco will go somewhere else. A lot of stores will quote you a cheap price and then they’ll try to upsell you. I believe you should start with the quality part and simply say, “Here’s the part you need. Do it right the first time.”

Getting it right the first time is the only option for Flowers. He doesn’t have time to waste. He’s a husband, a father of six and an active church member. He proudly say he learned the value of hard work from his parents, who worked tirelessly yet still made family a priority. Flowers may not have all the time in the world to spend with his family, but when he does have time, he said he lives every minute as if it were his last. Like most of us, 90 percent of his time is spent with his co-workers.

“We have a good time jokin’, pickin’ and havin’ fun, but we work hard,” Flowers said, laughing as J.R., one of the youngest guys at the warehouse, teased him for enthusiastically talking with his hands. “We don’t work on commission and I’d prefer it that way. I’ve seen too many instances where commissions turn friends into enemies. I don’t know about you, but I’d rather work with friends.”

And they’re all pleased to work with Flowers, a man who never has anything bad to say about anyone, unless, of course, it’s a friendly jab at a co-worker.

Advertisement
In this article:ACDelco, Counter Professional Of The Year, Parts Plus