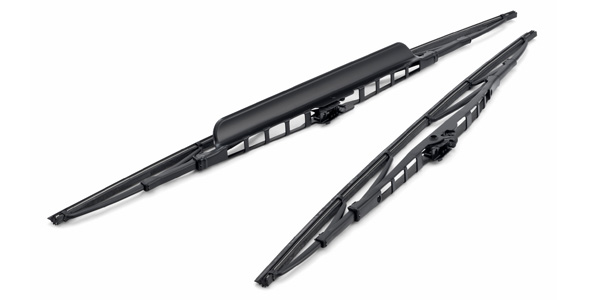 For whatever reason, windshield wipers are one of the most neglected parts on a vehicle.

For whatever reason, windshield wipers are one of the most neglected parts on a vehicle. If the rubber blade hasn’t completely disintegrated, chances are some of your customers will insist on keeping them until there’s a total failure. There’s an even greater chance your customers don’t even know when their wipers need to be replaced because they don’t know what to look for on the blade.

Replacement wipers typically are sold by the length, and can be found in any wiper catalog by make/model – or you can measure the blade itself. But don’t just measure one side. The driver- and passenger-side wipers often are different lengths, so make sure both are correct before making the sale. And don’t forget about the rear wiper if the vehicle is so equipped. A blade that’s too long could hit the edge of the windshield or touch the other wiper. Conversely, a blade that’s too short might not clear enough of the surface area of the windshield.

Most wiper blades only will last a few months to a year before the performance starts to diminish. Consumer Reports tested several brands and found the average lifespan of a wiper blade was about six months. For premium blades, the lifespan may be up to a year. Most wiper manufacturers recommend changing blades once a year. It’s difficult to convince consumers to change blades more than once a year, which is why many manufacturers offer premium silicone blades that withstand the elements better than standard rubber blades.

If the blades are in good condition but not clearing the windshield like they used to, a good spray-down with glass cleaner and a microfiber cloth can remove some of the dirt and debris on the edge of the blade. After a time, the weather breaks down the rubber and they will start to deform on the edges, especially on a dirty windshield.

Today, more and more vehicles are coming with beam-style blades that don’t have any exposed frame, so they work in all weather conditions. The beam is arched and spring-loaded, so it provides even pressure across the entire length of the blade. Winter blades are more robust for dealing with harsh cold, rain, ice and snow, but they don’t work as well in warmer months. Traditionally, the vehicle owner switched from winter to summer blades and back again, but this is becoming less common due to the higher-quality silicone blades. While premium blades cost more, they also last about twice as long on average.

If you work in a retail auto parts store, replacing wiper blades for customers is one of the few “hands-on” types of services you perform. Most stores have a policy of installing wiper blades for free if the customer buys the blades at that location. The vast majority of wipers come with an adapter kit to fit several types of wiper arms. However, the hook-style is the most common. With the hook-style blade, you push the clip in and pull down on the clip.

It’s best to raise the wipers off the windshield to replace them. If the spring on the wiper arm is weak, you should recommend a new arm as well. A weak spring doesn’t have as much force to hold the wiper against the windshield.

All wiper blades might seem the same from your customers’ perspective, but explaining the differences and service intervals can bring in easy add-on sales, especially in winter months.

Windshield Wipers Need to Be Replaced at Least Once a Year