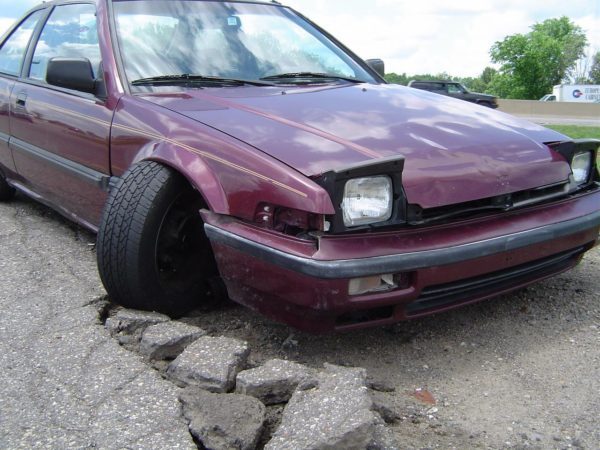 Ball joints are classified as either “load-carrying” or “follower” types, and their position in the suspension varies depending on the suspension design. These two types of joints often have different wear and failure rates, with the load-carrying joints usually failing first.

There are two kinds of ball joints, and I don’t mean “name” brand and “store” brand…. Ball joints are classified as either “load-carrying” or “follower” types, and their position in the suspension varies depending on the suspension design. These two types of joints often have different wear and failure rates, with the load-carrying joints usually failing first.

The “short-long arm” (SLA) suspension design features both upper and lower ball joints, and is commonly found on older, rear-wheel drive vehicles and some 4×4 applications. In the majority of these designs, the coil spring is seated in the lower arm, supporting the weight of the vehicle. The lower ball joint is the load-carrying joint in this type of suspension, while the upper ball joint is the “follower,” with no significant load to support. It acts only as a second pivot point for the steering knuckle. Some SLA designs have the coil spring seat integrated into the upper control arm, where the upper ball joint becomes the load-carrier and the lower ball joint acts as the follower.

In the popular McPherson strut suspension, there is only a lower ball joint. In this design, the lower ball joint is a follower, with the bottom of the strut connected directly to the steering knuckle and wheel. The bearing plate of the upper strut mount carries the vehicle’s weight, leaving the lower to act only as a pivot point.

Solid front axles (like those found on full-size 4×4 trucks) do not have separate control arms, so the upper and lower ball joints share their loads equally. In addition to (theoretically) sharing the same load and wearing at similar rates, lower ball joint replacement on these axles requires removal of the upper joint before accessing the lowers, so replacing both joints at the same time is a good idea.

Load-carrying ball joints fall into two further categories: “compression-loaded” and “tension-loaded.” Consider the location of the loaded ball joint in each of the previous designs. In the first SLA example, the loaded lower ball joint is located below the centerline of the wheel, and the sprung weight of the vehicle is pressing down on the lower control arm. This creates a tension load, as weight tries to pull the lower ball joint away from the knuckle.

In the second SLA example, the upper ball joint is the loaded joint, and the weight of the vehicle is transferred through the spring downward, onto the upper arm. This type of ball joint is under a compression load, as the force of the sprung weight is attempting to force the arm and knuckle together.

Ball Joint Basics: Load, Follow Or Get Out Of The Way