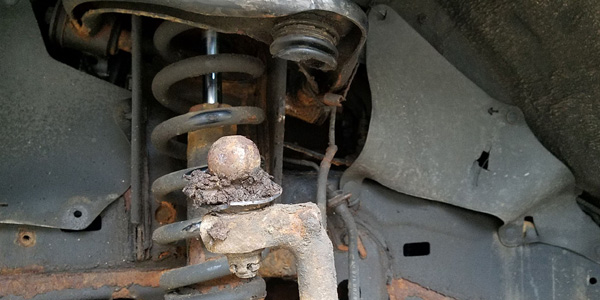 I recently encountered a broken ball joint on the way home from work. I was pretty sure I had a worn ball joint by the clunking sound I heard a week before the incident. The noise wasn’t always there, but when turning under load, I felt a sure clunk in the steering that was a telltale sign of the problem.

Yet, even as I write about this stuff frequently, I joined the untold millions who ignore their car problems and choose to turn up the radio instead. However, the difference was I knew the problem had to be dealt with sooner or later, but I was hoping it would be on my terms – at some point when it was more convenient. Does life ever work that way? News flash: It doesn’t.

As I drove down the road near my house and turned onto my street, it happened. I heard a much louder “clunk” and a “snap.” Next thing I knew, I could no longer steer my vehicle. At that moment, my defeat was imminent and I jumped out to inspect the damage. Sure enough, the left front wheel was askew and folded up into the wheel well. The upper ball joint came entirely out of the socket, which forced the wheel into the upper control arm. Fortunately, I was less than 100 feet from my driveway and was able to limp it home slowly. The damage could’ve been much worse, so I count my blessings.

One of the most common symptoms of a failing ball joint is that clunking sound as the vehicle drives down the road. It can be especially prominent over rough terrain (I had turned down a bumpy brick road just before the incident). The clunking will get continuously louder as the ball joints wear, or until they eventually fail entirely and break (as in my case). Upon further inspection, the ball-joint boot was torn and the grease had long since evacuated the socket. It was just a dry ball and socket against salt, grime and bumpy roads – a sure recipe for failure. 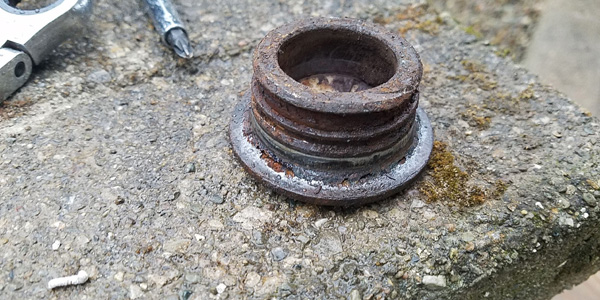 Of course, ball joints aren’t the only suspension parts that wear out and fail. Tie-rod ends and control arms also can wear out and fail with equally poor results. As the tie rod, ball joint and control arm are linked together on the front suspension, when one component starts to fail, there’s a good chance the others aren’t far behind. When a ball joint or tie rod has excessive movement, the driver typically can notice something is wrong if the car starts to wander in lanes or have a vague feeling like it isn’t responding quickly to inputs.

Tie-rod ends also are connected with a ball and socket that needs grease for smooth operation. If a boot is torn, that’s the beginning of the end. Suspension damage also can cause an impact to the ball and socket joints. The damage may not be noticeable right away, but if the socket or ball becomes damaged internally, it could lead to a failure.

Control arms can sustain damage from running over an object that puts too much load on a bushing or the arm itself, causing it to bend or break. Control-arm bushings typically are made of durable rubber or polyurethane housed in a metal sleeve. The bushings flex and move while driving to help cushion the ride and road noise, but they should return to their original shape. Worn bushings cause the wheels to shimmy and may be felt in the steering wheel. The vibrations usually are most detectable under acceleration, and they smooth out at higher speeds.

Technicians and counter pros hear tales like mine all the time. Whether it’s a worn-out ball joint, tie-rod end or suspension bushing, moving parts wear out at some point over the lifespan of the vehicle and can cause significant consequences if the issues aren’t dealt with promptly.