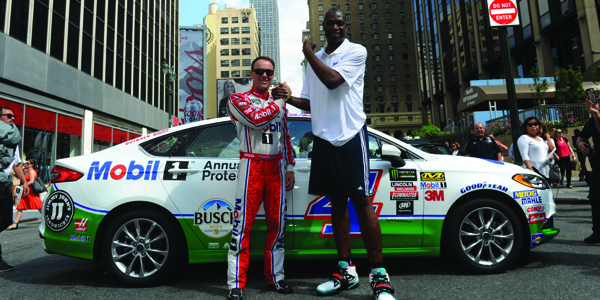 Launched in March, Mobil 1 Annual Protection enables drivers to go one full year – or up to 20,000 miles, whichever comes first – between oil changes, according to the company.

NEW YORK CITY – On Aug. 16 at Plaza33 outside New York City’s Penn Station, ExxonMobil brought the worlds of NASCAR and the NBA together with a fan-friendly event called “Mobil 1 Annual Protection: The Drive” to support the company’s latest synthetic motor oil offering.

Launched in March, Mobil 1 Annual Protection enables drivers to go one full year – or up to 20,000 miles, whichever comes first – between oil changes, according to the company.

Basketball and motorsports fans joined Stewart-Haas Racing’s Kevin Harvick and NBA hall of famer Dikembe Mutombo at a pop-up basketball court, where they were given the opportunity to put their shooting skills to the test in a series of challenges to win Mobil 1 Annual Protection prizes and rewards.

One lucky fan was given the once-in-a-lifetime opportunity to ride with 2014 Monster Energy NASCAR Cup Series champion Harvick in a Mobil 1 Annual Protection car, with Mutombo joining as a fellow passenger.

“The Drive” is not the first time Mutombo and Harvick have teamed up this year, with both appearing in the Mobil 1 Annual Protection nationwide advertising campaign as miniature-sized roommates living in an engine. Mutombo also got his first taste of NASCAR in March at the Kobalt 500 NASCAR Cup Series race at Las Vegas Motor Speedway, where he joined Harvick and the No. 4 Stewart-Haas Racing team on pit road.

On the track, the Mobil 1 Annual Protection brand served as the primary sponsor for one race for each of the four SHR entries during the 2017 Monster Energy NASCAR Cup Series season, including Harvick’s No. 4 Ford.

Advertisement
In this article:motor oil