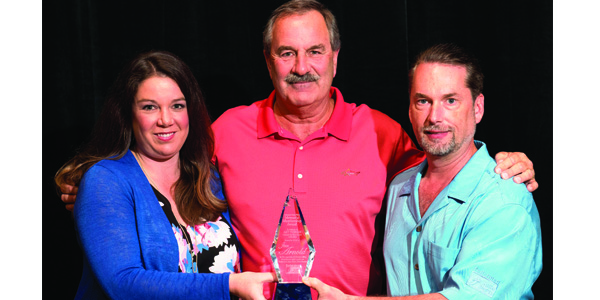 The award is the highest honor bestowed upon a Federated Auto Parts member.

Awarded annually, the Art Fisher Memorial Award recognizes those members who carry on Art Fisher’s legacy through their outstanding dedication to the membership, the group and the industry. In short, it recognizes the long-term commitment that individual members demonstrate through their support, involvement, counsel and loyalty.

“There is no one better to have introduced the recipient of this esteemed award than Ashlee Arnold,” Fisher said. “As a next-generation leader of a successful family business, she has seen firsthand the commitment, hard work and proactive leadership that her father has brought to both Arnold Oil and the Federated membership for so many years. Jim is charismatic, intelligent, funny, respected and the ultimate man’s man. We are truly blessed to have Jim Arnold as a part of the Federated family.”

Gene Arnold founded Arnold Oil in 1939 in Corpus Christi, Texas. Jim Arnold, the third generation to run Arnold Oil following his grandfather and uncle, opened the current operation in March 1977 in Austin and a new 137,000-square-foot warehouse in 2015.

During his 21 years as a Federated member, he has served on the Federated Board of Governors, various Federated committees and a variety of auto care industry boards and committees.

Advertisement
In this article:Arnold Oil Co. of Austin