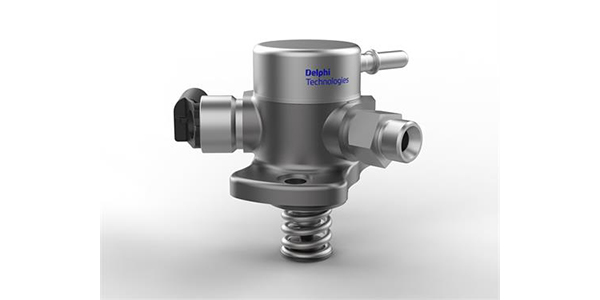 For a majority of engines, the new system allows engine designers to deliver the many benefits of a 500+ bar injection system without costly design changes, according to the company.

Delphi Technologies is helping automakers comply with future emissions regulations quickly and cost effectively, as well as simplify Real Driving Emissions test (RDE) compliance and contribute to improved air quality. Building off its 350 bar GDi (Gasoline Direct Injection) system, the company has developed a 500+ bar GDi system that the company says can reduce particulate emissions by up to 50 percent without the need for expensive engine re-designs for the majority of applications.

With an innovative new sealing system and a new, downsized plunger, the pioneering design of Delphi Technologies’ high-efficiency fuel pump delivers the increased pressures needed without increasing the load on the engine’s camshaft, the company states. For a majority of engines, the new system allows engine designers to deliver the many benefits of a 500+ bar injection system without costly design changes.

“The industry has long recognized that increasing injection pressure to 500 bar or more could substantially cut engine-out particulates,” said Walter Piock, chief engineer, Delphi Technologies. “The challenge for automotive engineers has been to achieve higher pressures without putting a heavier burden on the fuel pump. The solution is a new, high-efficiency pump designed by Delphi Technologies.”

To complete the 500+ bar system, the company has optimized other components including injectors, a forged rail and the engine control system and software. These components, which further improve durability and reliability, also require minimal changes, if any, to today’s engines because they match existing packaging constraints and interfaces.

At the end of 2016, Delphi Technologies was among the first to enter production with a 350 bar GDi system, which reduces exhaust particulates by up to 70 percent compared with typical 200 bar systems. The new 500+ bar system is expected to be in production from 2022.

Advertisement
In this article:Delphi, Delphi Technologies