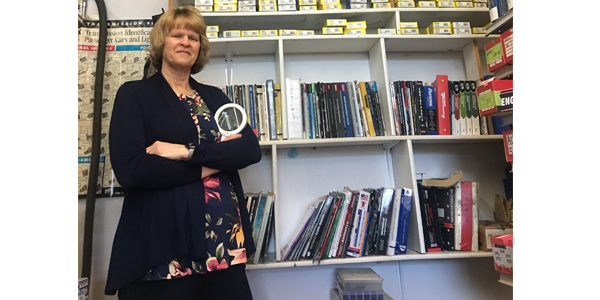 Schulze’s uncanny ability to remember part numbers is just one of several qualities that make her special.

Patti Schulze has a knack for remembering things. Her first day on the job in the automotive aftermarket – at a mom-and-pop parts store in Newport, Washington – was Dec. 9, 1980. The date is etched in her memory because it was the day after John Lennon was murdered in New York City.

“I remember driving over to the auto parts store for my new job, and that’s all they were talking about on the radio,” says Schulze, now the co-owner of Patti’s Action Auto Supply in nearby Priest River, Idaho.

But it’s her ability to remember the little things – numbers especially – that has made her so successful in the auto parts business.

“That was one of the reasons that I did so well when I started selling parts in the ‘80s, because I could remember the part number for a small-block Chevy fuel pump or a set of points and I didn’t have to look them up every single time,” Schulze says. “And it’s kind of amusing now because somebody will walk in and they’ll go, ‘Hey, I’ve got a 1976 Chevy and I need an intake manifold gasket,’ and everybody turns and looks at me, and I’ll go, ‘We need an MS 90314-2.’”

Over the years, her talent has earned her the admiration and loyalty of many customers, including Steven Stewart, co-owner of Lyle’s Service Station in Priest River. Stewart says he’s been working with Schulze for three decades, going back to when his father owned the service station.

“If you ask anybody who has dealt with Patti, they’ll tell you that she’s the best,” Stewart says. “She’s the most knowledgeable counter person there is around here. She’s just awesome to deal with.”

Schulze’s uncanny ability to remember part numbers is just one of several qualities that make her special.

“Not only is she the best counter person around, in my opinion, but she’s also the nicest,” Stewart adds. “She’s just as sweet in person as she is on the phone.”

In her first job in the aftermarket, Schulze was a part-time bookkeeper. The store, owned by Al and Helen Hammond, didn’t have a computer, so her main responsibility was keeping track of the stock record cards – the old-fashioned system of managing parts orders and inventory. After a year or so, the Hammonds hired her on a full-time basis.

“I was hired as a bookkeeper, but I absolutely loved looking stuff up,” Schultz recalls. “So I made a deal with Al that if I got my bookwork done, he we would train me on the counter. That’s how I got started. I was fascinated by the fact that you could look something up in a book and it made somebody’s car run. I just thought that was the coolest thing in the world.”

By the mid-1980s, Schulze was managing the small store in Newport. Toward the end of 1988, an area businessman, Larry Wiser, approached her about opening her own store. At the time, Wiser owned Spokane-based Parts Wholesalers, which supplies auto parts to independently owned jobber stores in Washington, Idaho and Montana.

“I was making a sales call at the store where she was working, and I was really impressed by how she handled customers and how she knew the business so well for a young person,” Wiser recalls.

Wiser provided the financing for Schulze to get started, and she opened her store in Priest River on May 1, 1989, as Schulze remembers it. At first, the store was called Action Auto Supply.

“She lived up to all her promises and did very well,” says Wiser, now retired. “She became a good customer of our business, and it helped everybody.”

Stewart can attest to that. For decades, Schulze has been helping him keep his business running smoothly.

“She is the best,” Stewart says matter-of-factly. “If it’s not in the book or it’s not on the computer, she knows what it is, just from her years of doing this. It’s awesome dealing with Patti.”

While Schulze’s knack for remembering part numbers drew her to the business, her passion for helping people has driven her to keep going all these years.

“I have such a wonderful assortment of customers, and I truly enjoy helping them,” Schulze says. “I love nothing better than when somebody comes in and says, ‘I’ve been everywhere and nobody can find this.’ I thrive on that kind of challenge.”

The Power of Relationships

With a population of around 1,700 people, Priest River is a logging town on the Pend Oreille River, just a stone’s throw from the Washington border and Newport, where she got her start in the 1980s. A native of Southern California, Schulze moved to Priest River with her family shortly after graduating from high school, when her father retired from the U.S. Marines.

Over the years, Schulze has staked her reputation on her order accuracy and her commitment to keeping her promises. She also prides herself on knowing the local market better than her competitors.

“At some of these big-box stores, you walk in and ask for a set of points for a Ford 8n tractor, and if it’s not in their computer, they don’t sell it,” Schulze says. “I have them on the shelf.”

Schulze estimates that 70% of her customers are DIYers. Even though it’s a sparsely populated area, she’s not the only store courting their business. Within the past year or two, an O’Reilly Auto Parts popped up about five miles from her store, and AutoZone will open a store next door to O’Reilly this summer, she says.

Still, Schulze believes her independent shop has an edge over the big-box competition. For one thing, it’s hard to match her decades of parts knowledge, paired with her preternatural ability to remember numbers. It also helps that her husband is a former mechanic. Between the two of them, they can handle just about question or request that comes their way.

“We’re just as knowledgeable on points and carburetors as we are distributorless ignition systems and fuel injection,” Schulze says. “ … And we’re still learning on the new stuff. We learn something almost every single day.”

If it’s a particularly obscure question, Schulze has an arsenal of “wonderful sources in the industry.” “I’ve done this for so long that I have specific people at specific dealerships and businesses that I can call for help when I’m not sure about something,” she adds.

Knowledge “and the willingness and ability to help above and beyond” are a few of the keys to survival for independent stores such as hers, Schulze says. Perhaps just as important are the relationships she’s built through decades of being part of the community. Over the years, Patti’s Action Auto Supply has sponsored tee-ball teams and fishing derbies and donated to other local causes, with a focus on those that benefit youth, “because I feel that’s my future.”

“Probably 50% of the people that walk through the door I know by name,” Schulze says. “So they’re acknowledged right away: ‘Hey John, how are you today? Is your wife doing any better? Did your daughter have that baby yet?’ When I ask that, I truly want to know. I’m not asking just because I’m being nice; I want to know how you’re doing.”

It’s the same dynamic when she calls her Federated Auto Parts warehouse distributor, Automotive Jobbers Supply in Spokane. “We’ve done business there for so long that we know everybody by name,” she explains. “It’s employee-owned, so a lot of the guys stay there for a long time.”

Schulze has flown the Federated flag from the very beginning, thanks to Wiser, a former Federated member who encouraged her to join. She hasn’t regretted the decision.

“When I first started back in 1980 in Newport, you could be a totally independent store,” she says. “But as time has gone on, there’s no way you could compete as a complete independent. I make all my own decisions, but I have the buying power and backing of Federated.”

On a Friday afternoon about a year and a half ago, life threw Schulze a curveball. A customer called in search of a wrench for a drop-in oil filter. As Schulze searched the parts rack for the wrench, she suddenly lost her
vision. Soon afterward, she was in the emergency room.

“It literally came out of nowhere,” Schulze recalls. “ … And unbeknownst to me, I had a hypertensive crisis. My blood pressure shot sky high. I had an intravenous bleed in the back of my eye. When I got to the ER, my blood pressure was 211 over 108, which is stroke-level.”

Fortunately, Schulze wasn’t having a stroke. But when her bloodwork came back, she received some sobering news: She had diabetes.

Although Schulze still is legally blind, she’s regained much of her vision since the incident. “I’m grateful for what I have, because when it first happened, I was completely blind,” she says.

Schulze also is grateful for the support of her family, employees and customers. Unable to drive, Schulze relies on her husband as well as her youngest son, Josh, and his wife, Fawn – both of whom work at the store – for “helping me get done what I need to get done.”

Incredibly, Schulze is back at work. She gets emotional when she talks about “the outpouring of compassion” from her customers since her initial health scare.

“My customers have been phenomenal. They’ll tell me, ‘Well Patti, I know it takes you a little bit longer to look stuff up now, but it’s always right, so I’ll wait for you.’”

Schulze uses a magnifying glass to compensate for her limited vision, and she has expanded her computer display as large as it will go. To view catalogs, Schulze relies on a vision machine borrowed from the Priest River Lions Club. “I probably still have 60 feet of catalogs in my store,” she says. “They’re in the back, and I use them every single day.”

Often, though, she’ll simply tap into the vast, detailed memory banks in her head and steer her employees in the direction of the part they’re trying to find. “I get them in the right church,” Schulze says. “They find the right pew.”

Schulze and her husband are getting to the point in life that retirement is on the horizon. When that happens, their son, Josh, might take over the family business, although Schulze admits, “I don’t know that for sure.”

Until then, Schulze, 57, will continue to use her God-given abilities to serve her customers, even without most of her eyesight. Says Schulze: “I absolutely love what I’m doing.”