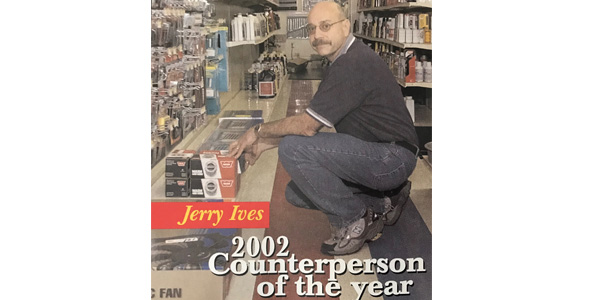 Ives is a renaissance man: a parts guru with a bachelor’s degree in music theory/composition.

Editor’s note: In the spirit of “Throwback Thursday,” Counterman is firing up the time machine and setting the coordinates for 2002. This feature article by former Counterman Associate Editor Melanie Deitch was the cover story in the December 2002 issue.

One conversation with Jerry Ives and it’s clear that there’s more than meets the eye with this parts professional. And a professional he is. Ives has decades of automotive parts experience. He’s been working the counter and managing the Mattydale, New York, Carquest for the last six years, but his expertise certainly doesn’t end there.

ASE certified, New York State Wholesalers Association certified parts specialist and certified vehicle inspector – these are just some of the titles that follow Ives’ name. And the most recent addition to that list of titles is 2002 Counterman Counter Professional of the Year.

“He’s a gentleman,” said Paul Powers, a district sales manager for Carquest, who has known Ives for more than 20 years and nominated him for the award. “He’s an intelligent guy who does a great job. Jerry knows how to listen to his customers, he knows how to solve problems and he does it in a cheerful way. He’s a happy person, he works hard, he has great balance – and he’s very deserving of this award.”

Ives was recognized by industry professionals at a University of the Aftermarket event, held in conjunction with the Automotive Aftermarket Products Exposition Show (AAPEX), which took place last month in Las Vegas. Counterman treated Ives, his wife Joan, and their 12-year-old son, David, to an all-expenses paid trip to attend AAPEX.

“The show was huge!” said Ives. “It was great; and it was mind-boggling. I loved meeting all of the people. I’m still in awe of the whole experience.” 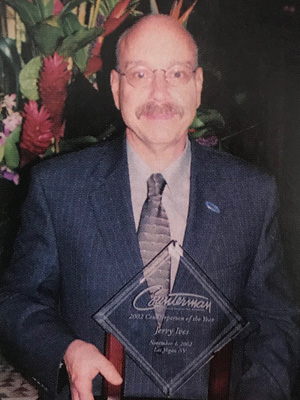 Ives wore an ear-to-ear grin the entire trip. And it seems that he’s always wearing that smile, which matches well with the cheery disposition he offers to anyone he meets both behind the counter and on the other side as well. He’ll chuckle about his bald head and the irony of being a parts guru while having earned both a master’s and a bachelor’s degree – in music theory/composition from Syracuse University.

“Music was my first love,” said Ives, who plays both the piano and the trumpet. “My mother was a concert pianist, and my father was a mechanic.” He laughed, adding, “So I guess I combined their talents well.”

If he wasn’t slinging parts, Ives said he would certainly be writing more music. Ives has had musical compositions performed and published in Europe and the United States.

“But you can’t quite put food on the table with writing and performing music,” he said. “I decided when I started working the counter that this was what I was going to pursue.”

But it’s no coincidence that Ives excels at both music and mechanics. According to Ives, both fields are similar – sciences with a joint basis in mathematics.

While obtaining his college degrees, Ives continually worked at automotive facilities in New York. He started out at Fitch’s Atlantic Service as a service-station attendant in 1968. He later managed operations there and performed both major and minor repairs on vehicles.

In 1980, Ives got his feet wet as a counterperson at South Salina Autoparts. After just two years, he and the owner opened another location, which Ives would manage for the next six years.

“I can relate well to my customers, and they can call me for advice on repairs as well as parts,” he said referring to his diverse automotive background. “When you find someone who appreciates your advice, it really makes you feel good when they call you back and say, ‘Hey, thanks for giving me that advice; I appreciate it.’”

But as if all of this automotive stuff wasn’t enough to fill his days, Ives remains active when on the other side of the counter.

It’s quite possible that Ives is just as busy in his free time as he is when juggling customers on the phone and in his store. Ives has taught auto mechanics courses to Cub Scouts and Boy Scouts and seminars about the automotive aftermarket at Onondaga Community College.

“Jerry and I have worked together since 1990,” said Richard Kent, a professor and the chairman of automotive technology at Onondaga Community College. “He’s been very helpful in my situation – since colleges have different needs than regular customers. Jerry follows through on everything; he always goes the extra mile.

“Jerry has a wide latitude for education,” Kent continued. “He’s a great supporter of the educational system, which is even more important with the advancing technology of newer vehicles.” 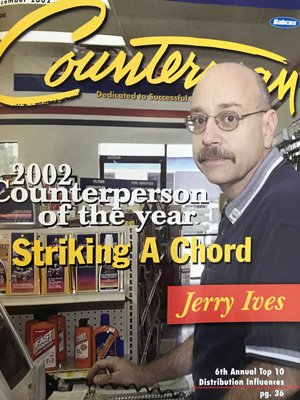 Due to his love of music and a respect for education, Ives has also enjoyed being a private instrumental music teacher for 27 years. He’s also a choir director at his church and an after-school music enrichment teacher at a local school. He served as the director of Salt City Playhouse School of Music and as the master of Salina Masonic Lodge No. 955, both for four years.

His children also got a helping hand in sports. Ives has been both an assistant basketball coach and a little-league baseball coach.

But those are easy challenges for someone like Ives, who excels at prioritizing his time. His bigger challenges are those over which he has no control.

The changing automotive aftermarket proves to be a challenge for every counter professional and technician.

“I enjoyed seeing the new products that were displayed at the [AAPEX] show,” Ives said. “Now at least I feel that I’m knowledgeable about them. It’s always hard to keep abreast of the changes in the industry.

“Our business is similar to the relationship between a doctor and a pharmacist,” he continued. “The technician is the doctor who is analyzing the part, trying to figure out what the problem is, then they call us for the remedy because we’re the pharmacists.”

Finding a remedy is only half the battle – delivery is the other half. And Ives excels at his delivery of customer service.

“In our end of the business we must satisfy the customer, with our knowledge and getting them the right part in a timely fashion,” Ives said. “If we don’t, then we haven’t lived up to what we’re here for. If we can’t do that, then we can’t sell parts. We’re a service-oriented industry. How well we make money is how well we satisfy our customers’ needs.”

Clearly, understanding the market and your customers is key to being successful in nearly any job. And, to counter professionals, it can make or break your business and your career.

“Educate yourself in all areas of the industry – from understanding what gross profit is, to what makes the store run, to how you stay in business,” Ives offered. “Understand what you’re selling – how an automobile works. Understand your customer and their needs. If you can combine all of these things, you’ll have a very successful career.”

Advertisement
In this article:AAPEX, Counter Professional Of The Year