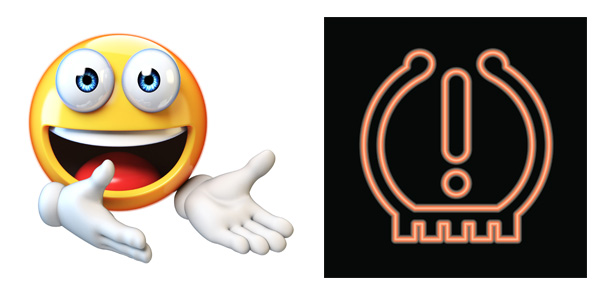 Nearly half of younger drivers (49 percent) and 39 percent of drivers overall were unable to recognize the TPMS warning symbol in the survey of more than 1,000 U.S. drivers.

Nearly half of younger drivers (49 percent) and 39 percent of drivers overall were unable to recognize the TPMS warning symbol in the survey of more than 1,000 U.S. drivers.

“The lack of awareness of the TPMS symbol, an electronic system designed to monitor the air pressure of a vehicle’s tires, is a clear sign that some drivers are in the dark on what the light means and what to do when it’s triggered,” Goodyear said in a news release. “Maintaining the correct tire pressure is critical to the safety, control and comfort of your ride – and can help save you money.”

To clear up the confusion for consumers when their TPMS light illuminates, Goodyear Auto Service and Just Tires are offering free tire-care checks, including free tire, air-pressure and TPMS inspections.

Possible causes for the TPMS light illuminating include a tire puncture; a leaking tire due to rim damage; and fluctuating temperatures as seasons change. Improper tire pressure can lead to uneven tread wear, decreased gas mileage and poor handling.

“Nobody knows tires like Goodyear, and if the TPMS light goes on or you want to know if it’s time to replace your tires, Goodyear Auto Service and Just Tires have the knowledge and expertise to help keep your car performing optimally this winter and beyond,” said Fred Thomas, vice president and general manager, Goodyear Retail.

The study also found that most drivers surveyed are not taking precautionary actions to prepare their cars for winter.

Among drivers who live in areas with usually cold winters, fewer than half (42 percent) get their tires checked in advance of the winter season. And almost two in five winter drivers (37 percent) don’t take any action at all to prepare their cars for winter unless they have an issue.

As a general rule of thumb, drivers should check their tires monthly, especially during temperature shifts of 10 degrees or more.