The direct TPMS system for Toyota vehicles uses a button labeled “SET” below the steering column or in the glove box to reset the system. When you press the button, the system is looking for the sensor IDs that are already stored in the memory. 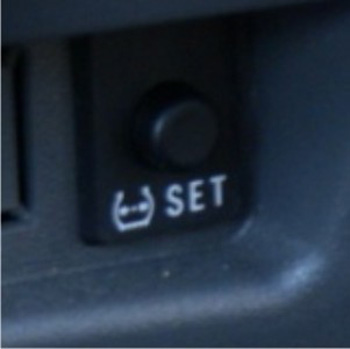 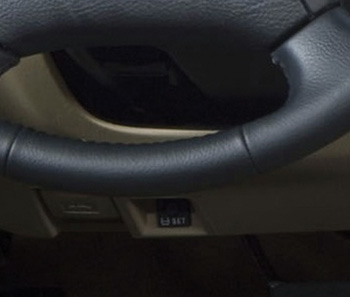 The direct TPMS system for Toyota vehicles uses a button labeled “SET” below the steering column or in the glove box to reset the system. When you press the button, the system is looking for the sensor IDs that are already stored in the memory.

This button is not a magic button saving you from purchasing TPMS tools and training. In fact, this button can get you into even more trouble if you do not know what you are doing.

Reset Procedure
1. Park the vehicle in a safe place and turn the ignition switch to the “LOCK” position.

2. Adjust the pressure of all installed tires to the specified cold tire inflation pressure level.

3. Turn the ignition key to the “ON” position.

5. Leave the system with the ignition switch in “ON” position for a few minutes, and then turn the ignition key to the “LOCK” position.

Typically, systems use a light on the dash and do not display individual pressures (some 2010 models display pressures in the drive information). When the vehicle is started, the light should illuminate for three seconds and go out if the system is functioning normally. If the light stays on, it means that the system has detected a low tire. The inflation of all the tires (sometimes including the spare) should be checked.

If the light flashes for one minute after the ignition is turned on or continues to flash, it is a sign the system has a malfunction that needs to be diagnosed. On some models, the frequency and length of the flashes can be used to diagnose a problem.

The “SET button” procedure should be used when rotating tires that have different tire pressures in the front and rear, changing or adjusting the tire pressure, or changing tire size, or when tires are replaced.

If there is a problem with one or more of the sensors communicating with the TPMS module during the reset procedure, it could go into a “looping” mode where it locks out the use of the SET button and the TPMS light will flash. The system is now stuck in this looping mode, and no matter how many times you press the SET button or cycle the ignition, the light will continue to flash.

The only way to stop the looping and the system from looking for sensor IDs not in the memory is to perform a procedure that puts the system into a “learn mode” (see “Stuck in a Loop”).

Sensor Replacement
Toyota uses either Pacific or TRW sensors and modules. The system monitors more than pressure and temperature, it also looks at the wheel speed sensor, engine RPM and other inputs to make sure the system is operating within set parameters. If the vehicle has a problem with any of the information that is shared along the CAN-BUS, it will not function properly.

Whenever you replace a sensor, module or install a second set of wheels, the new ID numbers for the sensors must be programmed into the system through the OBD II connection. The ID numbers can be found on the sensors. Sometimes it is not until the tire is installed on the rim or the vehicle, that the techs realize they now need those numbers. Some dedicated TPMS tools can collect the IDs by either capturing the periodic transmissions from a sensor, or by activating the sensor by letting pressure out of the tire so that the pressure drops 6 psi within 30 seconds.

After you have the sensor IDs, it is just a matter of following the directions on whatever tool you are using and inputting the IDs. Some tools make it easier than others; some will even tell you if you have to collect an ID from the spare.

Stuck in a Loop
Toyota vehicles prior to 2009 are equipped with a Tire Pressure Warning Reset Switch that can be used for initialization. When the button is pushed and held for more than three seconds, the vehicle’s receivers are open and looking for the currently stored TPMS IDs.

What if there is a missing or broken sensor? What if there are new sensors on the vehicle that have not yet been programmed? This will cause the vehicle to become stuck in a loop, searching for TPMS IDs that are no longer there. If you have a scan tool and try to enter into the initialization mode it might say, “Lost Communication With ECU” or similar message.

Bartec USA has developed the Toyota Loop Reset tool to handle this issue. When a Toyota vehicle is stuck in the “loop,” the technician will not be able to write IDs using the OBD COMMS, and the tool will “error out.”  To verify it is a result of the loop condition, the technician can select the READ IDs option, which will connect and read out the IDs. IF THIS IS SUCCESSFUL, THE VEHICLE IS IN THE “LOOP.” 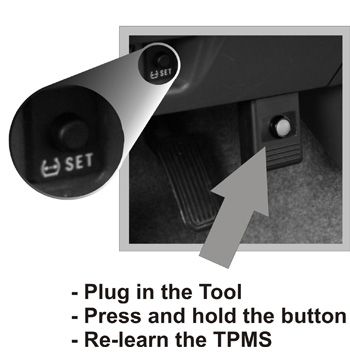 How to use the BARTEC WRTRST50 to Reset the Vehicle
1. Turn the ignition to the ON position.

2. Insert the WRTRST50 into the OBD II port on the vehicle. Once connected, press and hold the button on the WRTRST50 for at least 20 seconds. Do not cycle the ignition switch to the “OFF” position during this step.

3. Remove the WRTRST50, and resume the TPMS relearn procedure.
Note: Tool does not work with Land Cruiser models.