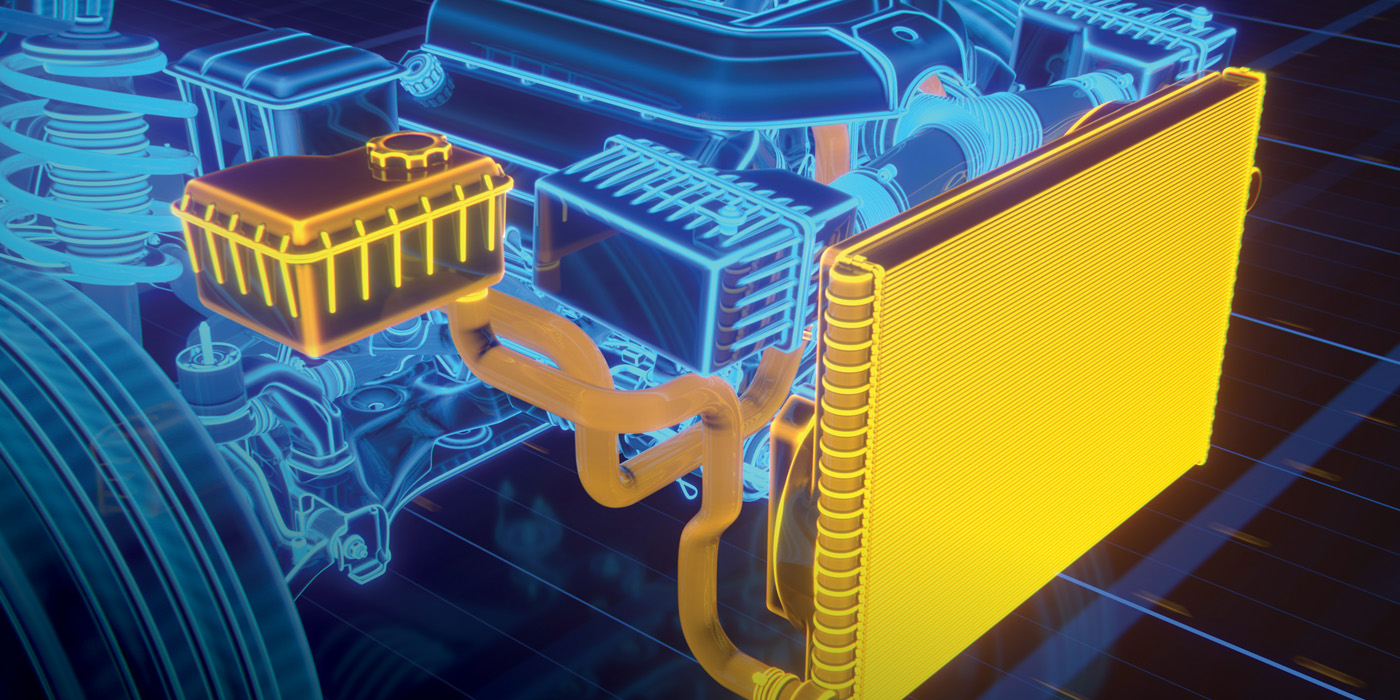 Modern cooling systems do a lot more than the simple name suggests.

The cooling system no longer is focused on cooling as much as it is on managing and maintaining a consistent engine and transmission temperature. Since our industry always seems to find a way to inundate us with new acronyms and terminology with every model year, it could be only a matter of time before they start to call it a Powertrain Heat-Management System (PHMS).

Make no mistake: The name is not real – at least not yet. I just made it up. But it’s a very accurate representation of what a modern-day cooling system does. To understand the technology of today’s cooling system and why the name almost deserves a change, let’s first look at a brief history mixed with a touch of science.

The term “cooling system” originally came about on the early automobile, and that’s exactly what they did. However, the early cooling systems were … simple. Scientifically known as “thermosyphon systems,” the hot coolant in the engine rose upward into the top tank of the radiator. As it cooled, it fell to the bottom of the radiator, where it then would flow into the engine block. The result was a continuous circulation of coolant through the engine, requiring no water pump or thermostat to make it work.

Although the early cooling system worked well, it had no choice but to evolve, as engines got bigger and became more powerful. If you think about an engine on a scientific basis, it’s nothing more than a way to convert heat energy into mechanical energy. Basic logic tells us that the more power an engine produces, the more heat is generated that must be removed.

Since cooling systems needed the ability to remove more heat, they quickly evolved into utilizing water pumps and thermostats. Thermostats always have had two purposes. First, the engine coolant must remain in the radiator long enough to transfer its heat to the air. When the thermostat is closed, it allows sufficient time for this to occur, and when it opens, the coolant flows into the engine and is able to absorb heat to begin another cycle.

Second, engines need to operate near the boiling point of water. Why? Because water is a byproduct of combustion, and this high operating temperature ensures that water is evaporated from the engine oil during operation. Without the thermostat set to keep things hot, the engine oil cannot burn off water and will quickly become contaminated.

Cooling systems, even as we entered the era of fuel injection and electronic management, remained fairly simple at first. But we knew that engine temperature was directly related to fuel economy, emissions and power output, and that maintaining that temperature where we wanted it was a necessary step to achieve our goals in those areas.

It didn’t take long before the need for precise engine-temperature control became a prevailing factor affecting both engine and cooling-system design. Many components that we thought would never change began to receive a full dose of technology. Here’s a look at how things are shaping up for the future.

While not an everyday item yet, electrically controlled thermostats are being utilized in some applications, and I expect we’ll see an increase in this. The ability of an internal-combustion engine to achieve maximum fuel economy, minimum emissions and maximum power occurs at slightly different temperatures for different operating conditions. By adding this additional level of precision to temperature control, we can match temperatures to operating conditions, increasing power output and fuel economy.

This need for precise temperature control is why modern fuel-management systems monitor coolant temperature and if there is any deviation outside of the expected norm, a very common diagnostic trouble code (DTC) is P0128 (“Engine Coolant Below Regulating Temperature”). As time goes on, we can only expect this to become a parameter that’s much more closely monitored.

To further illustrate the advantage of an electronically controlled thermostat, consider traditional (old-school) thermostat operation. As the engine warms up, the radiator and hoses remain cold. When monitoring cooling-system performance as a technician, it’s common to keep a hand wrapped around the upper radiator hose. It stays cold until the thermostat opens; then it gets hot really quickly as the coolant flows from the engine into the radiator.

Then we use our hands to feel the radiator tanks warming up, and when they do, we then expect that the electric cooling fans (if equipped) are due to come on within a few moments, and we often move our hand into the path of the air coming off of the cooling fan to sense the volume of airflow and amount of heat being drawn off the radiator. Hi-tech is watching the engine temperature on a scan tool while this happens.

The point of this? The overall process of heat transfer is slow, and extreme precision is not possible with a traditional thermostat. As a result, the most advanced engine-management systems are looking ahead at engine temperature based on throttle position and calculated load, so that they can precisely manage engine cylinder and head temperature, effectively managing combustion efficiency. It’s impressive. Electronics and electronic thermostats make it all possible.

What could possibly change about water pumps? That’s what I used to think, but they are changing. As effective as a traditional belt-drive water pump always has been, if we look at them from an old-school operational standpoint, as we did thermostats, we begin to see the flaws in their operation. Traditional belt-drive water pumps run the whole time at the speed of the engine, but with modern temperature-management technology, it’s not necessary for them to run constantly. Not only does this create an unnecessary drag on the engine, but it also can reduce the accuracy of precise temperature control.

By redesigning the traditional water pump and adding electric water pumps into the system, unnecessary drag is eliminated, and the engine-management system is able to generate coolant flow when needed, as needed. This can help reduce warmup time and also improve overall temperature control.

Electric water pumps also have the advantage of remote locations in engine compartments, which is beneficial as space becomes more and more constricted, and they are utilized for after-run features to help cool components such as turbochargers.

Electric cooling fans are not new by any means, but they no longer are a simple on-or-off type of fan. Early fans often employed a resistor to create both a low- and high-speed option, but many of today’s fans are pulse-modulated variable-speed fans that again give the engine-control module the ability to match fan speed with other operating conditions.

The newest member of the cooling-system technology family is the active grille shutter. Many manufacturers are utilizing this technology on certain vehicles, which, as you might have guessed, looks just like a set of shutters over some portions of the radiator. This can improve vehicle aerodynamics as well as decrease warmup times. They only open when needed to allow for additional cooling.

You also can throw in some valving and a high-voltage coolant heater to boost heater-core output, plus a completely different cooling circuit for the batteries, power inverter, transaxle and electric motor. The good news for us? There’s a lot more to fix and a lot more parts to sell.

So, when will they start to call it a PHMS? And I’m waiting for the day of GPS-monitored temperature-sensing microchips that float around the cooling system, reporting the exact temperature of the coolant along the way. Sound crazy? Probably. But if it ever happens, just remember where you heard it first.