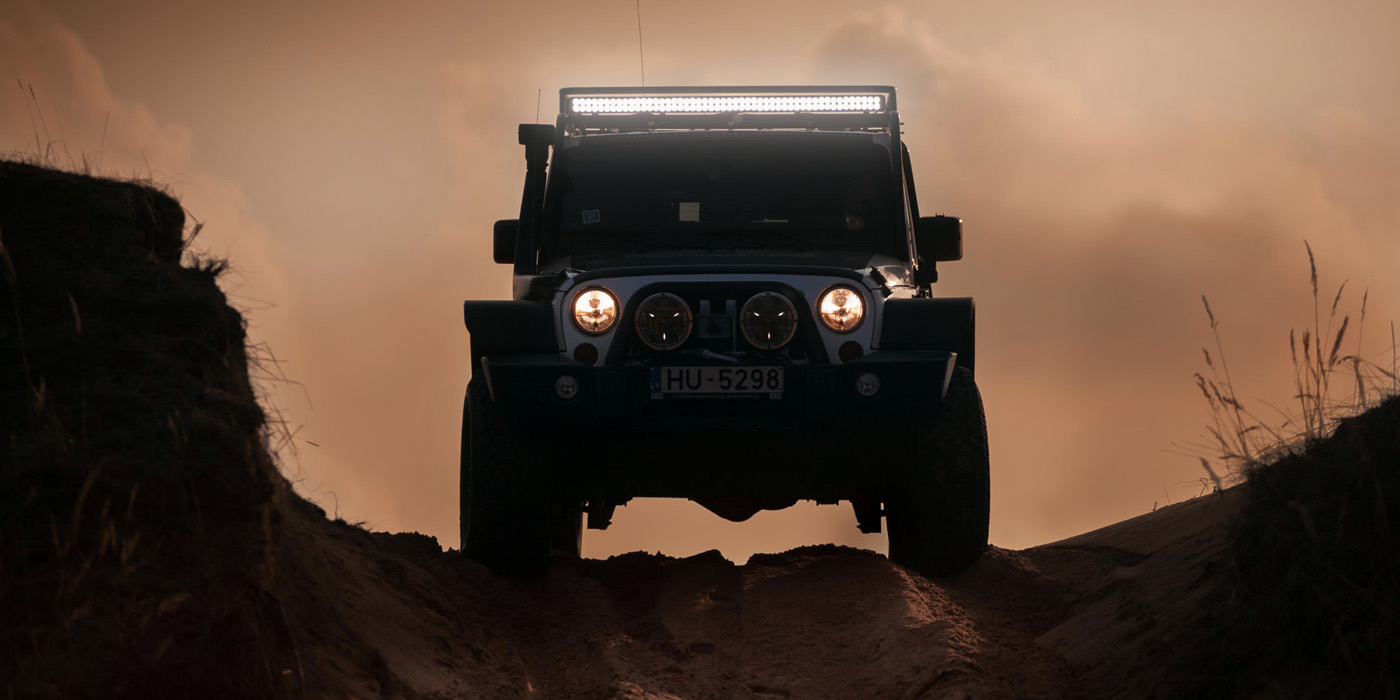 AWD is the technologically superior system.

What was the decade of the four-wheel drive (4WD)? Was it the 1970s or the 1980s? Or was it both? The popularity of trucks was growing rapidly in the ‘70s, and if you had a 4WD, it was just downright cool. Custom trucks were becoming a common feature in TV shows and movies, culminating with one of the more well-known 4WD trucks of the ‘80s in the TV series “The Fall Guy.”

4WD trucks transitioned from understated vehicles that were utilized strictly for their inherent capabilities to stand-out custom road machines with graphics and features that let the world know you had one. In big letters, “4×4” became one of the most recognizable markings on a truck. Consumers wanted 4WD, and it was only a matter of time before it showed up on a car, which it did on the AMC Eagle in 1980.

The popularity of the 4WD never waned, and the 4×4 graphics still adorn the side of many a pickup truck, but it also has blended permanently into SUVs and cars and has another name now: all-wheel drive. But is it the same, or is it different? Does it really matter? In order to understand, the foundation of knowledge sits with the operation of “old-school” 4WD, so let’s dial in to what it was, how it has evolved and where it is now.

The standard automotive powertrain for the majority of the 20th century was the front-engine, rear-wheel-drive (RWD) design. The rear axle assembly housed the differential and individual axles, and it is through this assembly that power was transferred to the wheels. Since this was the prevailing design of most cars and trucks on the road, no particular attention was drawn to it. For example, there were never any big letters on the side of a car that said “RWD.”

Even though front-wheel-drive (FWD) and 4WD cars were designed and manufactured during the early years of the automobile, they didn’t flourish, and the durability and simplicity of the typical RWD design made it the sole choice of automobile platforms for many manufacturers.

Figure 1 pictures a typical RWD vehicle. The power generated by the engine is transferred through the transmission to the driveshaft, differential, axles and rear wheels. Figure 2 shows a typical “old-school” 4WD vehicle. A differential/axle assembly is now located at the front of the vehicle, and to transfer power to the front, a transfer case is installed after the transmission and a short driveshaft is installed between the transfer case and front axle.

You also will notice that the front differential/axle assembly is different in two ways. One, the differential location is offset for clearance since the engines were always mounted in the center; and two, since the front wheels must turn in order to steer the vehicle, the axles must have some type of articulating joint at the end – the most common of which is the traditional universal joint, or U-joint.

The transfer case transfers the power that exits the transmission to either the rear wheels (RWD), or the front and rear wheels at the same time (4WD.) Another feature of a traditional old-school transfer case is that it offers both high and low ranges in either RWD or 4WD positions, as well as a neutral position. This is so if the vehicle must overcome particularly difficult terrain, it can be placed in the low range so the engine will operate at a higher RPM to provide additional torque to the wheels. The high range is 1:1, which means the output speed of the transfer case is the output speed of the transmission. The low-range ratio varies depending on manufacturer.

An important aspect of all this is differential operation. The differential itself transfers the power from the driveshaft to the axles, and it is necessary because it allows power to be transferred to the wheels, but also allows them to travel at different speeds when turning a corner. A conventional differential is considered an “open” design. An operating characteristic of an open differential is that it transfers power to the wheel that spins the easiest.

In other words, if one wheel is on ice, for example, that wheel will spin, resulting in minimal traction. The same affect is what causes a car under heavy acceleration to “burn rubber” with only one wheel. To combat this problem, there is another type of differential that is referred to as “limited slip.” There are many different names for this type of differential depending on the manufacturer, but that’s a whole other subject and their operation is the same for the sake of this discussion.

A limited-slip differential contains clutch packs built in between the side gears and the differential case. When one wheel begins to spin from loss of traction, the clutches will grab and transfer power to the other wheel. The same clutches will slip just enough to allow the wheel speeds to differ when going around a corner, so the normal differential action is still available.

Performance cars typically are equipped with a limited-slip differential so under acceleration they can achieve traction through both wheels. The next time you’re driving, and you see one black mark on the road from a burnout, that vehicle had an open differential. If you see two black marks, that car had limited-slip.

It’s important to note that the majority of cars and trucks come standard with open differentials, due to the additional cost of limited-slip. Limited-slip differentials have always been an option, just not standard. So, on a four-wheel-drive vehicle equipped with open differentials, technically speaking, the maximum number of wheels that can put power to the ground at any given time is two. That seems kind of funny on something known as a 4×4, but it’s still twice as much traction as RWD only, and for the most part it got the job done. Most people who were really going to be in some serious off-road situations would be sure they were equipped with limited-slip differentials.

We’re almost down to the final details of 4WD. For normal driving, the transfer-case gear selection would be “2WD High.” The internal construction of the transfer case is similar to a manual transmission, and there was a shifter lever protruding through the floor that was connected mechanically (via linkage or cable) to the transfer case. The vehicle operator would stop the vehicle, place the transmission in Neutral, then shift the transfer case into 4WD High, 4WD Low or 2WD Low, depending on their needs.

The drawback to having 4WD engaged was that it put additional strain on the drivetrain, caused additional wear to the tires and had a drastic effect on fuel mileage. This was because when engaged in a 4WD mode, the transfer case mechanically linked the front and rear differentials, so both of them were in effect fighting each other to turn at different speeds based on factors of traction, tire wear and vehicle direction (steering).

If you’re thinking 4WD was a rather imperfect system, it was. And it wasn’t designed for full-time use on the road. But that was then – now, understanding AWD gets easy.

To start with, the ability to transfer power to all four wheels has incomparable benefits for traction, vehicle stability and handling. Not only does this translate to the safety of daily driven vehicles, but it translates to the racetrack as well. The first vehicle to take advantage of an all-wheel-drive system in racing, the Audi Quattro, was such a dominating force in rally racing in the early ‘80s that it made the world take notice of AWD.

As the automotive industry was going through major changes in technology during the 1980s, 4WD was about to come along for the ride. Computers and electronics were opening a world of possibilities, and consumers were ready for a change too. All of a sudden, nobody wanted to get out and engage the front hubs on a 4WD. Pushing a button was better, so a number of different solutions were developed, including vacuum-operated hubs and vacuum and electronically actuated front axles.

Constant-velocity (CV) joints began to replace U-joints and smooth out steering effort on the front of a 4WD, as well as allow for independent differentials and independent front suspension, and it didn’t take long before the mechanical engagement of the transfer case gave way to push-button 4WD. All control was now via button or knob to select 2WD High, 2WD Low, Neutral, 4WD High or 4WD Low.

With electronic and vacuum control making 4WD engagement easier, it still had the problem of straining the drivetrain when engaged, and a way was needed to allow both the front and rear drivetrains to operate yet work independently of each other. The answer was a third differential mechanism in the transfer case (how the Audi Quattro system worked.) This allowed the front and rear differentials to turn at different speeds when needed, eliminating strain on the drivetrain. Some of these systems, when they first came out on trucks, were referred to as full-time 4WD.

This is where the lines begin to blur on the difference between AWD and 4WD, but there are a few more advancements in technology that draw a clear line in the sand. With antilock braking systems (ABS) and traction-control systems (TCS), we all of a sudden knew exactly what was happening at each wheel at all times. Was it losing traction? Was it locking up under braking? All of this data was now available, and engineers knew that the key to vehicle performance, safety and handling all together was in the ability to precisely control what happened at each wheel at any given point in time.

Here’s the icing on the cake: AWD differential technology. Traditional differentials, even limited-slip, were mechanical devices. There was no external control of how they operated. With electronics and computer control, the traditional differential became a technologically advanced unit containing not only gearsets, but also clutch packs like those in an automatic transmission, and their own pumps to pressurize the fluid.

The same technology is present in both front and rear differentials, as well as center differentials/transfer cases. AWD systems have the ability to precisely control the amount of torque that is transferred to any given wheel at any point in time, providing absolute control of the vehicle.

In conclusion, 4WD is functional, durable, rough and tough, but not user-friendly. AWD is the product of technology, computers and electronics. The precise control of exactly what happens at each wheel not only results in superior vehicle stability and control under any driving condition, but it also can truly transmit torque to any of the four wheels at any point in time.

It’s easy to see how the lines blur between the two and opinions may vary, but the way I see it, the difference is clear. AWD is the technologically superior system. Do you want to dig deeper into any of this? Let us know!