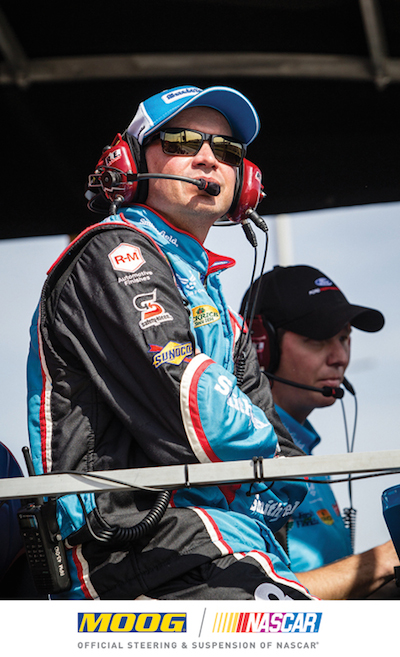 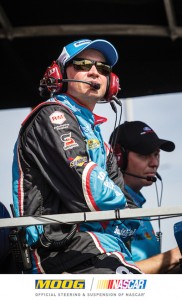 SOUTHFIELD, Mich. – Aric Almirola and his crew chief, Trent Owens, used a masterful pit strategy to pick up several positions and secure a top-10 finish in Sunday’s rain-shortened Quicken Loans Race for Heroes 500 NASCAR Sprint Cup event at Phoenix International Raceway. Following the race, which was red-flagged after 219 of 312 scheduled laps, Owens received his first MOOG Steering and Suspension “Problem Solver of the Race” award of 2015. MOOG is the Official Steering and Suspension of NASCAR.

Owens earned Sunday’s Problem Solver honors after the MOOG-equipped No. 43 U.S. Airforce Ford Fusion posted a race-best 0.178-second-per-lap improvement over the second half of the race. Almirola and the 43 car started 17th and struggled – along with several other teams – to remain on the lead lap during the first half. Owens and the Richard Petty Motorsports crew made several chassis adjustments during each of three first-half pit stops to address tight handling. As the car’s handling improved, Almirola regained his position on the lead lap and was running near the top 15 heading into what turned out to be the final pit stop of the night. Excellent work on pit road helped the 43 emerge in 10th place, a position Almirola maintained until action was halted 24 laps later. Winning the race was Dale Earnhardt Jr. and the MOOG-equipped No. 88 Chevrolet, but Kevin Harvick’s No. 4 Chevrolet – also equipped with MOOG parts – dominated much of the night, leading 143 of the 219 completed laps.

“Several teams, including Aric and Trent, were challenged to stay on the lead lap because the 4 car was so much faster than the rest of the field in the first half,” said Tim Nelson, director of motorsports for Federal-Mogul Motorparts. “Trent and his team steadily improved their car’s handling and did a masterful job in pit strategy to help put Aric in the top 10 before NASCAR called the race.”

Next Sunday’s Ford EcoBoost 400 will decide the winner of the 2015 Chase for the Sprint Cup as well as the recipient of Federal-Mogul Motorparts’ prestigious $100,000 MOOG Problem Solver of the Year Award. Greg Ives, crew chief for Dale Earnhardt Jr. and the No. 88 Chevrolet, holds a one-win advantage over Justin Alexander (Paul Menard, No. 27 Chevrolet).

Purolator Receives 3 Automotive Communication Awards At AAPEX
Connect with us