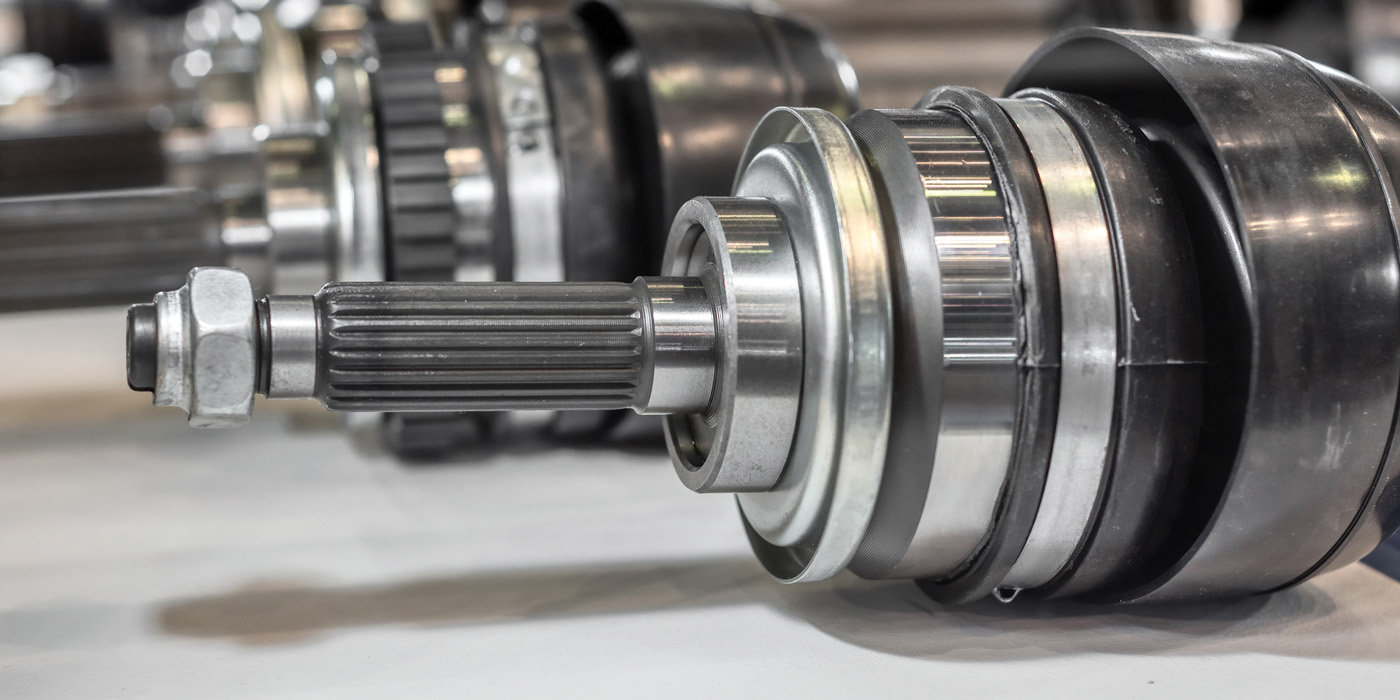 Today’s CV joints are a radical departure from anything resembling a U-joint.

What was wrong with universal joints anyhow? After all, they worked fine for years, and they still do! This is true, and U-joints can handle a lot of torque, but they do have a downside in the nature of their operating characteristics.

A U-joint does two things. First, it transfers the motion between the yoke(s) and driveshaft; and second, it does this at different angles, allowing for driveline movement. Here’s where the fun begins. When a yoke and the driveshaft are in perfect alignment, the velocity from one is transferred to the other at the same rate. However, when there’s an angle between the two, the velocity of the driven member fluctuates continuously during rotation.

The driven axis, however, rotates in a path that causes the distance of travel at the outer ends of the U-joint cross to increase or decrease in relation to the consistent points of the drive axis.

This effect results in the continuous fluctuation of velocity between the input and output sides. While the input remains at a consistent speed, the output speeds up and slows down as the points of the driven axis continuously alter between a long and short path of travel.

So, why don’t we feel that on a vehicle with a traditional driveshaft? Because there are two U-joints, and the fluctuation on each end balances out, effectively allowing the driveshaft to provide a consistent output speed to the rear differential. The angle of the two joints must be the same, however, and it doesn’t take much wear in one for the angles to differ, and subsequently cause a vibration.

U-joints are known for their propensity to cause vibration, and the other disadvantage they have is the greater the angle of the U-joint, the greater the fluctuation in velocity. Anything over 30 degrees and the fluctuation dramatically increases. Have you ever noticed how jittery an old four-wheel-drive truck feels in the front when the hubs are locked and you turn a corner? Now you know why.

You may have heard of a Double-Cardan U-joint. It’s basically two joints side-by-side with a common link-yoke in between. This is one of the original concepts for a true constant-velocity (CV) joint, and they’re often referred to as this. The advantage they have is they offer smoother operation at greater angles, and they’re common on four-wheel-drive trucks, and a common upgrade for lifted trucks where the driveshaft angle is altered considerably.

The drawback to a Double-Cardan joint is they’re bulky, and they still can suffer from limitations due to operating angle. True CV joints as we know them today have been around since the early 20th century, but the popularity of the front-wheel-drive (FWD) vehicle is what made them a household name.

Today’s CV joints are a radical departure from anything resembling a U-joint, and not only do CV joints transfer power without speed fluctuation, but they also can operate at angles up to and exceeding 50 degrees, depending on the joint. Since the drive wheels on a front-wheel-drive vehicle also steer, the ability for this increased operating angle is what makes the CV joint so beneficial for FWD.

A front-wheel-drive vehicle has two CV shafts – one on each side – and each shaft features an outboard and inboard joint. The outboard joints are considered fixed joints, meaning they don’t offer in and out movement. It’s their ability to operate at the increased angles for steering that’s important. The inboard joints are considered plunge joints, meaning they offer a wide range of inner and outer directional movement in order to make up for length differences as the suspension travels up and down.

You’ll see two types of CV joints. One is the Rzeppa design, which features steel balls trapped in a cage and riding on an inner and outer race. The tri-pod design is the second, which features three roller bearings that ride in a race or cage, sometimes referred to as a tulip assembly. Both types of joints can be found in either a fixed or plunging design for outboard or inboard use, but the Rzeppa design has proven more popular as an outboard joint. The Rzeppa works well as an inboard joint too, but the tri-pod design gets the nod for the most effective operation as a plunge joint.

The CV shafts themselves can differ in length from side to side, and in early FWD development, torque steer – the vehicle pulling in one direction or the other during acceleration – was sometimes a result of this difference. Different diameter shafts as well as hollow versus solid became part of the design aspects to combat this problem. Drivetrain mounting and torque control have advanced considerably since the early days of FWD, and torque steer rarely is a problem.

Even though the FWD vehicle put the true CV joint on the map, due to their overall advantages, CV shafts now are utilized front and rear, and it’s not uncommon to see driveshafts that feature CV joints instead of U-joints. U-joints aren’t forgotten, however, due to their ability to handle high torque, and they work well in abusive environments that may not be so friendly to the boot on a CV joint (such as the exposed location of a driveshaft under a truck).

CV joints are packed with a specially formulated grease, and a rubber boot is sealed to both the CV shaft and the joint, to keep the grease in place. When a boot is torn or begins to leak, the grease goes away, and dirt gets inside. CV joints typically need no service until this happens.

There was a time when the most common service for a bad boot was to remove the CV joint, take it apart, clean it, repack it and install a new boot. Generally, this was routine. However, from time to time you could experience a nightmare. Much of the reason we replaced the boots and serviced the joints in this manner was due to the high cost of a replacement joint or a complete shaft. Even with the additional labor, it was far more cost-effective to replace just the boot.

Over time, with advancements in manufacturing and the availability of supplies, the cost of complete CV shafts went down, and it simply made more sense to replace them as a complete unit, not to mention it makes things easier for technicians.

The most important part of selling a new CV shaft is making sure it’s the correct one. You should compare shaft length, the size of the CV joints themselves, and make sure it has an ABS tone ring installed if the vehicle is equipped with an anti-lock braking system. Some early CV joints had the tone ring cast into them, but that design was quickly abandoned for a press-fit tone ring. If your customer doesn’t yet have the original shaft out, be sure and make these recommendations to them so they ensure the shaft is correct prior to installation.

Installing a CV shaft is routine for professional technicians, but DIYers likely will have questions. One of the most important factors is torque of the fastener that secures the outer CV joint in the hub. If they don’t adhere to the factory procedure and don’t follow the correct torque specification, damage can and will occur to the wheel bearing.

Some CV-shaft applications come with an ABS tone ring installed, regardless of whether or not the vehicle is equipped with ABS. If not, in most cases, the ring has no consequence. However, in the rare situation where it rubs or contacts something, the rings can be removed easily.

The tricky part of CV-shaft service is there are some you can have out in a few minutes without even removing a wheel, and others that may take an hour or longer. The majority of them require some portion of the suspension to be separated, so the outer joint can be pulled out of the wheel bearing, then the entire shaft pulled outward as it’s removed from the transaxle. It’s fair warning that this is not always easy and might require specialized tools. As long as you convey that to the customer, they can’t say you didn’t warn them.