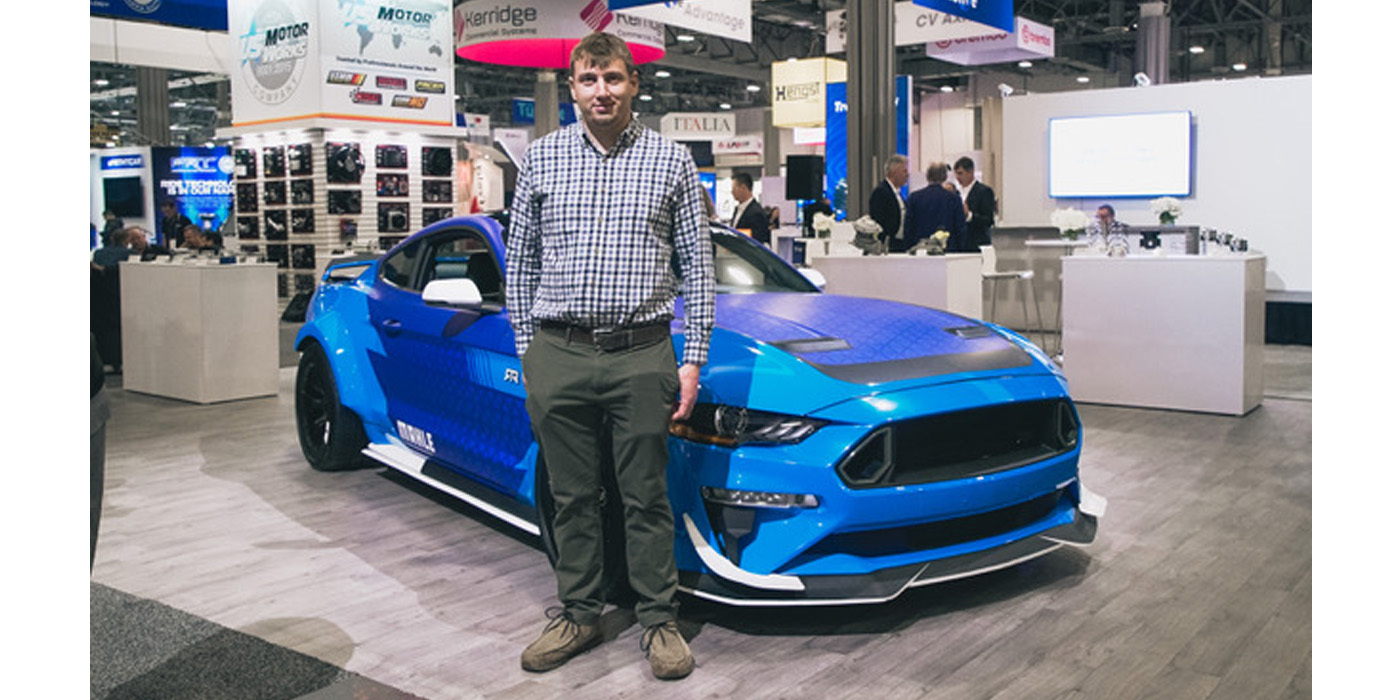 Jesse Yoder, owner of Jess Performance in Shipshewana, Indiana, was the grand-prize winner.

MAHLE Aftermarket Inc. hosted an unforgettable experience for attendees at the AAPEX in Las Vegas, with an action-packed opening day of activity to support the first-ever “MAHLE: The Choice of Champions” technician promotion.

From hosting some of motorsports’ most notable personalities during an exclusive VIP reception, to witnessing “The King”, Richard Petty handing over the keys to a one-of-a-kind vehicle as part of the grand-prize-winner drawing, MAHLE Aftermarket “pulled out all the stops” at this year’s event.

The once-in-a-lifetime drawing took place on Tuesday, Nov. 1, in MAHLE’s booth on the AAPEX show floor, with a few hundred eager show attendees packed together to learn who would be the lucky grand-prize winner. The ultimate giveaway up for grabs: the chance to walk away with the keys to their choice of one of two custom-designed vehicles from racing and automotive enthusiast legends Vaughn Gittin Jr. and Casey Currie. Vaughn Gittin Jr. provided an RTR Spec 5 Mustang with several high-performance enhancements, while Casey Currie’s team offered up a custom-built Jeep equipped with an off-road-ready, high suspension package.

Petty, Gittin Jr. and Currie, along with several other notable motorsports personalities such as John Force and Tony Stewart, were present when the four finalists each selected a key from Petty’s signature Charlie One Horse cowboy hat – one of which would unlock the lockbox holding the fobs to the two one-of-a-kind vehicles. And in true Vegas fashion, Jesse Yoder, the owner of Jess Performance in Shipshewana, Indiana, had the “luck of the draw” and was pronounced the grand-prize winner. Yoder, a frequent customer of Meyer Distributing, opted to select the RTR Spec 5 Mustang.

“We all congratulate Jesse for being the grand-prize winner of the ‘Choice of Champions’ promotion and want to thank the other three finalists, as well as all of the participating technicians around the country, for helping to make the program such a tremendous success,” said Jon Douglas, president of MAHLE Aftermarket North America. “Without a doubt, there was no wrong decision in choosing one of these incredible vehicles! Vaughn, Casey and their teams truly out-did themselves in building the Mustang and Jeep; and I want to thank them as well for bringing such great energy to this year’s promotion!”

For Yoder, who was randomly chosen as the third finalist to attempt to unlock the box, when his turn finally arrived, the adrenaline really started to kick in.

“Never in my wildest dreams did I think that my key would be the one to actually open the box to the prize of a lifetime,” said Yoder. “After my initial shock wore off, I immediately called my wife to tell her the great news. Believe me when I tell you that tears were flowing on both ends of the line! It’s an experience I will never forget, and I owe it all to the team at MAHLE for running such an incredible promotion.”

Also onsite to witness Yoder draw the lucky key from Petty’s signature cowboy hat were some of his biggest fans: the team of executives from Meyer Distributing, a leader in automotive specialty products marketing and distribution serving thousands of customers nationwide.

“We wouldn’t have missed the opportunity to cheer Jesse on at the show and to witness first-hand all the excitement, not only from the finalists and the MAHLE executive team, but from all of the guests in the booth and the curious onlookers in the surrounding aisles on the show floor,” said Austin Zehr, category sales manager of gas/diesel performance at Meyer Distributing. “We’ve been fortunate to partner with Jesse for some time now and nobody deserves this win more than him. He is the definition of a true ‘champion’ of the automotive repair industry, always putting his customers first to ensure they receive the best service the industry has to offer.”

From a small test workshop to one of the top 20 automotive suppliers, MAHLE is proud to celebrate 100 years of delivering superior quality products around the world. For more information about MAHLE Aftermarket and its brands, visit www.mahle-aftermarket.com, or contact your local sales representative.

Advertisement
In this article:AAPEX, MAHLE