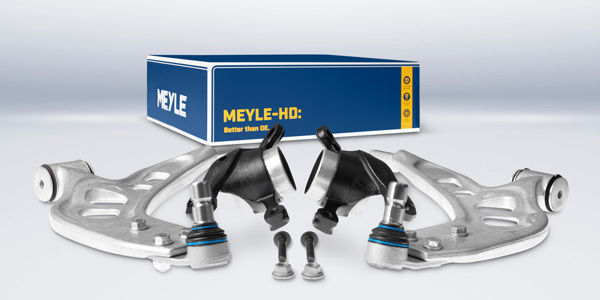 The aluminum construction ensures that the control arms are durable and well-protected against corrosion, according MEYLE.

The MEYLE-HD control-arm kit for BMW and Mini includes both control arms (left and right), matching MEYLE-HD bushings with holders and the necessary fastening material.

The aluminum construction ensures that the control arms are durable and well-protected against corrosion, according MEYLE.

“The MEYLE-HD kit with the aluminum control arms was developed by MEYLE engineers in Hamburg, Germany, and was accompanied and tested at every stage of the process – from the initial idea to production and comprehensive quality tests,” the company explained in a news release. “The result: another high-quality repair solution from MEYLE that saves time and money in everyday activities at the workshop.”

At 4.2 kilograms, the control arm is just under 20% lighter than its OE counterpart, according to the company.

The durability of the new MEYLE-HD control arm has been confirmed in an independent TÜV NORD test report commissioned by MEYLE, according to the company. In contrast to its OE counterpart, the MEYLE control arm survived the test under realistic load situations without damage.

“On the basis of the operational durability tests carried out, it was found that the MEYLE-HD control arms of type 3160500128/HD achieved more than twice the number of load cycles under the same dynamic loads and under identical test conditions as the triangular control arms by the vehicle manufacturer, and thus a significantly longer service life,” the report says.

Westar Releases 58 New Engine And Transmission Mounts
Connect with us