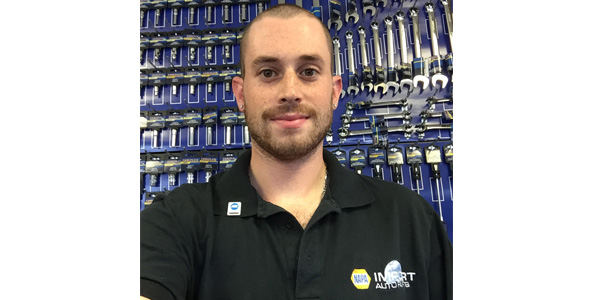 Marra’s father owns a NAPA store in New Canaan, Connecticut, and Marra recalls tagging along with his dad on Saturday mornings when he was 4 or 5 years old. “I always love telling people that my earliest memories here are reaching up to put a part on the bottom shelf,” Marra says.

R.J. Marra likes to say he was born with a catalog in his hand. It’s not that far from the truth. Marra’s father owns a NAPA store in New Canaan, Connecticut, and Marra recalls tagging along with his dad on Saturday mornings when he was 4 or 5 years old.

“I always love telling people that my earliest memories here are reaching up to put a part on the bottom shelf,” Marra says.

Marra started working part-time at his dad’s store when he was in high school. Now 26, Marra celebrated his 10th anniversary at the store in December.

“I don’t really know anything else,” Marra says. “I had one other job in my life – working construction for a summer – and that was while I was doing this part-time.”

Marra’s father, Rich Marra Sr., taught him that “any job worth doing is worth doing right.” Clearly, the message hit home. R.J. Marra has completed more than 500 training courses – most of them through NAPA – to build his knowledge of auto parts and accessories, tools and equipment and automotive technology.

To excel at his job, Marra believes it’s vital to keep his knowledge and skills sharp. “Even if I learn one little detail from a one-hour class, that one-hour class was worth its weight in gold. Sometimes even a refresher course can remind you something you may have forgotten.”

Marra calls his ASE certification his “car diploma.” In addition to the knowledge that comes with passing the ASE P2 test, certification gives the 26-year-old credibility with his customers.

“A lot of guys will walk into the store, look at me and walk right past me to the oldest person on the counter,” Marra says. “They’ll ask him a question, and most of the time [the counter person] will point at me and say, ‘I don’t know. Ask him.’

“And then once the customer sees the plaque on the wall, and they listen to what I have to say, they kind of go, ‘OK, he’s a professional.’ It’s my way to show people that I take pride in this, I’m up to date and I want to help you.”

Of course, Marra’s regular customers already know that. Whether it’s delivering a starter on New Year’s Eve or tracking down a hard-to-find part while he’s sitting on a beach (most of his installer customers have his cellphone number), Marra always is willing to go the extra mile. He recalls driving to a dealership to get a part that NAPA doesn’t carry and the dealership couldn’t deliver, just to help a repair shop “get a car off a lift.”

“I always tell my shops, ‘Whatever we have to do to help you get that car off the lift, you name it,’” Marra says.

Attending NAPA Autotech training classes with local shop owners and technicians has helped him strengthen the relationships with his installer customers. Previously, the nearest training location was a two-hour drive from New Canaan during rush hour, and Marra would offer to take his customers to and from the classes. When he convinced NAPA to move the classes closer to the New Canaan area, attendance from his customers doubled.

Attending the classes together has paid dividends for the installers and Marra.

“Their return rate is dramatically lower than anybody else’s,” Marra explains. “And they’re buying more tools from me. They’re calling me to refer back to something that we learned in the class together, or calling me for a part because I was there when the instructor talked about it. You form a bond.”

Marra even took some of his installer customers on a tour of a NAPA distribution center. The trip left a lasting impression on those who attended.

“These guys are always begging me to go back. They tell me, ‘I never realized how much you guys had to offer until we went there.’ That was one of the most important things I did, because the guys still talk about it. I’m trying to put together another tour now.”

Marra is at his dad’s store six days a week, “no matter what’s going on.” Even though the store opens at 8 a.m., he’s there by 6 a.m., which gives him time to work on an online training course or polish the counter. In the early-morning hours, his installer customers might stop by to pick up their overnight orders too.

Somehow, Marra finds time to volunteer twice a week at a local animal shelter. He started helping out at the Ridgefield Operation for Animal Rescue several years ago – shortly after he adopted his dog, Corona, from the facility. “They helped me find my best friend, so I want someone else to get that same experience.”

Marra also has volunteered for various functions at his church and has been a basketball and baseball coach in local youth recreational leagues. But it’s safe to say that his first love is the auto parts business.

“I really love when someone comes in here with something that I don’t know what it is because it’s from some old, old car or some giant truck, and I can go into the computer or blow some dust off a catalog and say, ‘Ah ha! Here it is,’ and whoever brought it in says, ‘How the hell did you do that?’

“I just like a challenge. I want to be able to find something for somebody where maybe they’ve already been somewhere else and the [counter person] said, ‘Oh I can’t get that for you,’ or you get the people from out of town who break down, or even locals who break down. I just want to help. I just want to help the person get their car running and get it running right. I want to be their go-to.”