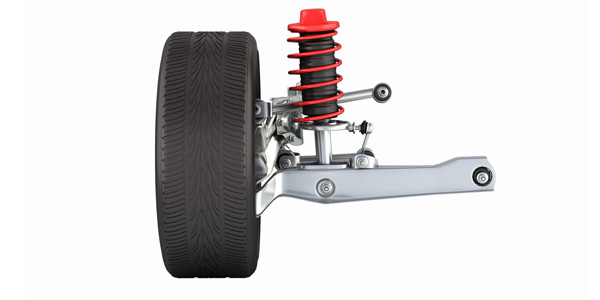 Selling shocks and struts can be an uphill challenge because when they fail, they rarely leave the driver stranded. Most people don’t notice when their suspension starts to decline in performance, and they get used to how it feels – until something breaks or finally convinces them to replace the unit.

Shock absorbers are the heart of the suspension system and come in three basic designs – mono-tube high-pressure gas, twin-tube low-pressure gas and twin-tube hydraulic (non-gas). Gas is used in some shocks and struts to reduce oil foaming that can result from cavitation as the oil moves in and out of the valves inside the shock/strut. Eventually, the gas leaks out and can cause the unit to overheat and fade, which manifests in poor handling and braking.

As the suspension moves with the undulations in the road, a piston inside the shock travels up and down. Over time, oil starts to leak between the piston and cylinder and bypasses the valving. Shocks are controlled by valves that flow oil in and out of the piston. The continued wear on the shock causes the springs to work harder and wear out sooner as well. Tires wear in an uneven pattern from the suspension bouncing up and down. Ball joints and tie rods wear from the increased movement and bottoming out, and soon the vehicle needs major repairs as its handling deteriorates.

Shocks are filled with oil with different viscosities, so when the oil heats up, the rate of flow thins out or becomes more viscous. The movement of the shock depends on the rate of oil flow through the valving, which works independently in both compression and rebound in most cases. OEMs design the shock valving to match a specific tire and vehicle dynamics that it specifies. Stock suspension performance is generally a compromise between comfort and handling.

A shock and a strut perform the same job, damping the movement of the spring and controlling bounce. Even though struts and shocks perform similar tasks, they have quite a few differences and are not interchangeable. Struts are similar to a shock absorber internally. On a strut, the piston is attached to the end of the rod and uses fluid to control spring and suspension movement. The strut rod is three times the diameter of a shock rod, and is velocity-sensitive. How the struts are valved determines the amount of resistance and the rate of movement in the suspension.

Struts can wear differently than shocks because they’re an integral part of the suspension. Suspension movement is transferred through the rod to the body of the strut and up to the strut mount. The strut rod is supported by the piston as well as by a bushing or bearing at the top. Because the strut has to do so much more work than a shock, wear also can be more dramatic and affect more systems that the driver will feel.

When replacing shocks or struts, a test drive should be performed along with a thorough visual inspection of the dampers for noticeable leaks or bent/broken components. Struts and shocks typically should get replaced in front and rear sets. If you replace one damper at a time, the vehicle may be unbalanced on the corners (tires) and put more stress on the other components. An alignment is necessary after replacing struts, since they’re part of the suspension and steering system. However, shocks can be replaced without one.

Must drivers don’t understand the differences between shocks and struts or how they function internally. Drivers can get used to how their car feels and not be aware of the deteriorated ride quality. As a counter pro, you should be able to explain how new shocks and struts can restore a customer’s ride quality back to original or better performance with quality aftermarket components.