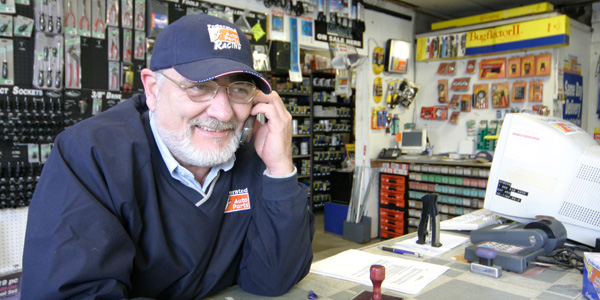 Editor’s note: In the spirit of “Throwback Thursday,” Counterman is firing up the time machine and setting the coordinates for 2004. This feature article by former Counterman Editor Brian Cruickshank was the cover story in the December 2004 issue.

On any given Sunday night in Northeastern Ohio, channel surfers and automotive enthusiasts alike know him simply as “Handy Randy,” the affable host of “The Handy Randy Show,” a local automotive television program that reaches nearly 2 million households.

But that name, “Handy Randy,” is much more than just a television persona. It really defines the soul of this year’s Counterperson of the Year as he strives to be helpful to his customers, employer, industry and community.

Since the late 1960s, Randy Lipscomb has been a familiar face among those in the automotive parts business in the Akron, Ohio, area. But for the last 10 years, he’s been a celebrity of sorts as the show’s host. The show’s format is an entertaining mix of viewer call-in, interviews and coverage of regional and local automotive events.

But Randy’s show is not another DIY-show knockoff. His aim is a little different – one that ends up shining a spotlight directly on local technicians and repair-shop owners.

“I don’t want to teach people to be do-it-yourselfers,” said Lipscomb. “I don’t want people to work on their own cars, except maybe very simple things like oil changes.”

But when it comes to opening the hood, Randy educates his viewers to take their cars to a qualified repair shop. And who are these qualified shops? Very often they are Randy’s own installer customers.

On a typical show, Lipscomb “demystifies” the repair process and at the same time shows motorists how valuable a qualified automotive technician really is. It’s really an ingenious idea: Through his show, Lipscomb shines a spotlight on his best wholesale customers, and the same time, drives motorist business directly to them.

Not only does the show allow Randy to exercise his naturally gregarious personality, but it also gives him an edge when making calls on local garages.

“When I walk into a shop, I might be the fourth or fifth salesman that shop has had to deal with that day,” he explained. “But since I’m ‘that guy on TV,’ the technician or shop owner will take time to talk to me. This might be the technician’s sixth or seventh attempt to fix some sort of tough diagnostic job, and he doesn’t want to be bothered. But then I come in. Even if the guy hates my show, he’ll stop what he’s doing to tell me that.”

And for Randy that’s OK. All he wants is a little of their time. Then his salesmanship and charm take over.

It’s that kind of out-of-the-box thinking that makes Randy so very handy to motorists, his customers and his employer, Federated member Pat Young Service Co.

A Heart Behind the Counter

Even though Lipscomb’s day job has been actively calling on local repair shops on behalf of Pat Young’s Akron-area stores, his first love (when not in front of a TV camera) is behind the counter. When Randy was hired by Pat Young, after a long career with a group of locally owned NAPA stores, he made it clear he still wanted to keep one foot on the street making calls, and the other foot firmly planted in the store environment.

“Knowing how to run a counter and a store is a real benefit for me in the my role as an outside salesman. I understand the dynamics of how the store operates, how the store manager operates, and that helps me figure out how to best service our customers when I’m making calls. 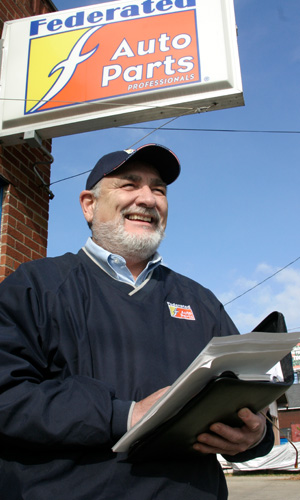 When Randy is not taping his show, the self-acknowledged car nut is involved in a long list of other automotive projects: organizing classic-car cruises; hosting a local dealership’s clinics for new car owners; advising a local vo-tech program; or recruiting shops on behalf of the Automotive Service Association. But his real extracurricular love is the charities to which he devotes a significant amount of time and energy.

Take Super Kids, for example. Akron, Ohio, is the well-known home of the All-American Soap Box Derby. However, it’s also the home of an annual event that allows special-needs children the opportunity to race in specially designed cars. The program, called Super Kids, hosts these children from around the country.

“It doesn’t cost the parents anything,” said Lipscomb. “We supply the car, the hill and the thrill, and any special-needs child can participate. It’s one of the highlights of the year for these children. They really love it and look forward to it every year.”

Lipscomb also devotes time as a counselor at Camp Quality, a free summer camp for children with cancer.

“There are 15 of these camps in the U.S., and ours (in Ohio) is the second-largest,” said Lipscomb. “We might not be able to add quantity, but we can add quality.”

For all these reasons, in November Counterman magazine named Lipscomb the 2004 Counterperson of the Year. The award was created in 1986 to recognize those who excel in the demanding parts-distribution profession.

“This is a well-deserved honor for Randy,” said Duke Young, president of Pat Young Service Co. “Randy has done an outstanding job operating and maintaining one of the strongest Federated Car Care programs in the U.S.”

“We are thrilled that one of our counter people won this prestigious award,” said Mike Schultz, executive vice president of Federated Auto Parts. “We pride ourselves on having friendly, knowledgeable and hard-working counter people in all of our auto parts stores. This award is a wonderful testament to Federated’s commitment to customer service.”

Check out the December issue of Counterman for a feature story on the 2018 Counter Professional of the Year.

Advertisement
In this article:Counter Professional Of The Year, Federated Auto Parts