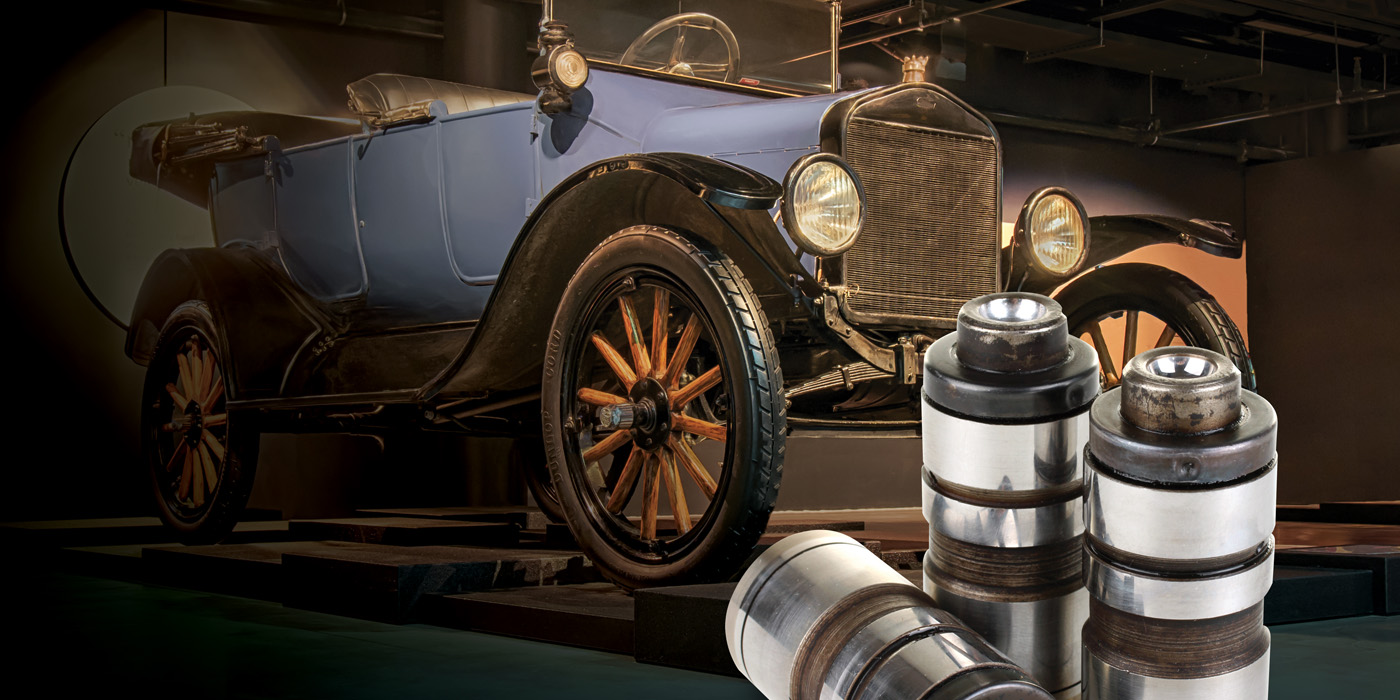 All About Engine Valve Lifters

The history of valve lifters goes back to the earliest days of the
internal combustion engine.

Lifters fall under the category of “engine hard parts,” a category that also includes piston rings, valve springs, pushrods, cams, connecting rods and other metal parts inside an engine. You and/or your customers might know them as “tappets” (more on that in the next paragraph). Some might even know them as “lash adjusters.”

The history of valve lifters goes way, way back to the earliest days of the internal combustion engine. The earliest engines didn’t have pushrods or rocker arms; they featured a “flathead” design with the valves positioned below the combustion chamber in the engine block. Lifters rode on the cam lobes in the block and actuated the valves directly. They earned the “tappet” moniker by virtue of the clattering noise they produced.

The emergence of the overhead-valve (OHV) engine was a major step forward because it allowed the engine to breathe more efficiently and develop more horsepower from the same displacement. But, the OHV design added complexity to the valvetrain because it required the addition of pushrods and rocker arms. The lifters also had to route oil up through the pushrods to lubricate the upper valvetrain components.

The basic function of a valve lifter is fairly simple. It sits on the camshaft and transfers the motions of the cam lobe up through the pushrods and rockers to open and close the valves. The size and shape of the cam lobe under the lifter (multiplied by the ratio of the rocker arms) determines valve lift and duration. As such, the lifter just follows the motions of the cam. But it does play a role in valvetrain lash (which is why some people call it a “lash adjuster”) and noise.

According to Topline Automotive, a manufacturer of lifters and other engine parts, lifters come in two basic designs: flat-bottom and roller lifters.

“The flat-bottom lifter requires the use of a specially developed material that will endure the constant wiping pressure of the rotating cam lobe,” Topline explains on its website. “The roller lifter converts that wiping force into a rolling force using a roller bearing, resulting in a design that has less friction and a wider acceptance range of camshaft-lobe profiles.”

Roller lifters can accommodate more aggressive cam-lobe profiles with faster opening and closing ramps that allow more total valve opening for a given lift and duration, making them popular in racing and performance applications.

The lobe profile of a flat-tappet camshaft is distinctly different than that of a roller cam, and the two types shouldn’t be interchanged with their corresponding lifters. In a flat-tappet design, the cam lobes have a slightly angled profile, and the base of the flat lifter is, in reality, slightly convex. This combination of shapes causes the lifter to rotate in its bore, imprinting a matched wear pattern on the components. These unique wear patterns mean that when reassembling the valvetrain, it’s crucial to replace each lifter in its original bore, or to use new lifters. Roller designs don’t exhibit this wear pattern, so roller lifters can be reused and, theoretically, interchanged between cylinders.

Within both of these designs you’ll find hydraulic and mechanical (also known as “solid”) versions. Depending on the design of the engine’s oiling system, either type is capable of supplying oil to the upper valve-train components.

Hydraulic lifters were first developed back in the 1930s and became common in production engines in the 1950s. They’ve been the industry standard for decades now.

Unlike the solid lifters from the early days of motoring – which weren’t much more than a hollow slug of metal – hydraulic lifters feature an internal piston assembly that’s free to move within the outer body. The hydraulic lifter uses internal oil pressure to “bridge the gap” within the valvetrain components. As the engine starts and runs, this pressure automatically compensates for temperature and expansion, bringing the valvetrain to effectively zero lash, allowing for smoother, quieter operation.

Hydraulic lifters are kinder on valvetrain components than solid lifters because zero valve lash reduces the hammering effect that occurs when the valves slam shut at higher engine speeds. There’s no air gap to fill, so the valve simply follows the cam lobe as it closes for a more gentle landing. This also reduces noise and helps extend the life of the valvetrain components.

Once adjusted to the prescribed preload, hydraulic lifters usually never have to be adjusted again over the life of the engine, according to Topline. However, issues with sludge or inadequate oil pressure can allow these lifters to tick or clatter or cause other obnoxious noises normally associated with a solid-lifter setup.

Generally speaking, hydraulic lifters “are great for a maintenance-free valvetrain but do have some limitations,” according to Topline.

“In some performance applications where higher valve-spring pressure is required, a standard hydraulic lifter might not be able to handle the extra spring load resulting [from] the piston collapsing,” the company explains. “The collapsing will cause a loss in valve lift and usually a ticking noise.”

Topline offers three different types of hydraulic lifters to accommodate a wider range of performance requirements: OEM design (manufactured to be a direct replacement of the original equipment); race design, also referred to as “variable-duration” lifters; and slow design, which act like mechanical lifters in performance applications, according to the company.

As noted earlier, mechanical/solid lifters are very simple by design: They have no internal moving parts and have zero effective loss in camshaft-lobe lift. You can still find adjustable solid lifters for the Model T and flathead Ford engines, among other vintage applications.

“This type of lifter requires there to be some initial valve lash to allow for thermal growth in the valvetrain,” Topline explains. “This valve lash will change over the life of the engine and usually has to be readjusted to maintain the correct amount designated by the engine manufacturer.”

When selling flat-tappet valvetrain components such as camshafts and lifters for older vehicles without catalytic converters, remember to recommend break-in oil, and/or zinc dithiophosphate (ZDDP) additives. The anti-wear properties of these specialty lubes can be critical to maintaining the long life of new parts in old vehicles.

All About Engine Valve Lifters