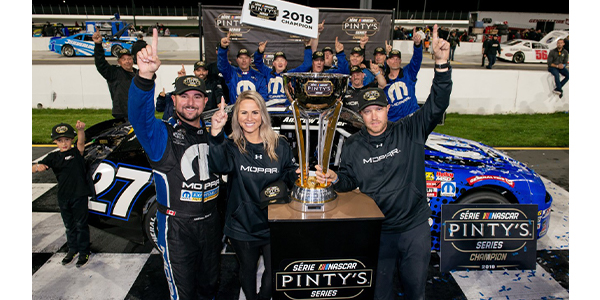 Last Saturday, the Spectra Premium high-performance radiator won its second consecutive championship in the NASCAR Pinty’s series. This time, it’s racer Andrew Ranger who won the championship at the wheel of his No. 27 MOPAR/Pennzoil.

Last Saturday, the Spectra Premium high-performance radiator won its second consecutive championship in the NASCAR Pinty’s series. This time, it’s racer Andrew Ranger who won the championship at the wheel of his No. 27 MOPAR/Pennzoil.

Like many drivers this year, Ranger, as part of the DJK Racing team, acquired a Spectra Premium high-performance radiator in the offseason. During the racing season, about 15 drivers benefited from the Canadian-built radiator. Among the many users, we find Ranger with teammate D.J. Kennington and Raphaël Lessard at his first races in the series.

“I want to congratulate Andrew on his brilliant championship victory. With four wins and seven podiums, Andrew held a dominant position throughout the season until his successful conclusion. Congratulations on your third title,” said Collin Francis, Vice President of Sales & Marketing Aftermarket U.S.A. “I would like to thank DJK Racing and all the teams who trusted the performance and durability of our radiators this year. In a competitive world like that of motor racing, every advantage counts.”

Ranger crossed the finish line in fourth place on the Jukasa Motor Speedway near Hamilton, Ontario last weekend, securing his title. During this exemplary season, the Roxton Pond driver has won four races and has secured at least one top-10 finish in every race on the calendar.

This season, as General Manager of the Dumoulin Competition team and business partner of Spectra Premium, Jean-François Dumoulin contributed to the adoption of the high-performance radiator in this series.

This last race concluded an even more prolific season for the high-performance radiator, which has accumulated 8 wins in 13 races as well as 20 podiums, 32 top-5 and 54 top-10 finishes thanks to the many drivers.

In parallel, a version of the radiator developed for the American NASCAR Gander Outdoors Truck series has started its first season. First adopted by Raphaël Lessard in the spring, the radiator has already won two races with Toyota trucks from Hattori Racing Enterprises and a second-place finish at Canadian Tire Motorsport Park in Bowmanville, Ontario thanks to the efforts of driver Alex Tagliani in KBM’s #51 truck.

Events: Autopromotec 2022 Will Have An International Flavor

Events: PRT To Exhibit At The Group Conference And Expo

Events: Why Your Marketing Doesn’t Work As Well As You Think [Webinar]

Auto Care To Host Webinar On Challenges Of Ocean Shipping

AASA To Convene Intellectual-Property Event
Connect with us