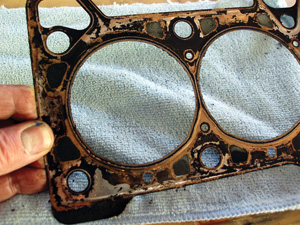 When selling engine gaskets, the modern parts professional is often faced with a dizzying array of gasket technologies. The difference in gasket technologies among a ‘50s-model pickup truck, a ‘60s-vintage, high-compression muscle car and a modern bi-metal or aluminum engine is often quite dramatic. As we’ll see below, the practices that apply to older engines often conflict with those applied to modern engines. To eliminate some of the confusion, let’s begin by separating gasket technology into three different eras.

GASKET TECHNOLOGY, 1957
Oil pan and tappet cover gaskets of this era are stamped from compressed cork and held in place by tying the gasket in place with sewing thread or by gluing the gasket to the metal surface with commercial gasket shellac. Replacing a rope-type crankshaft oil seal isn’t a job for an amateur. To the contrary, most require old-school expertise to install.

Cylinder head gaskets used on all cast-iron engines are a composite design of asbestos or asbestos-substitute material sandwiched between two thin sheets of steel or copper clamped together by a stainless steel fire ring crimped around the edge of the cylinder bore. In some cases, early cylinder head gaskets require a periodic re-torquing to prevent the gasket from leaking. Exhaust gaskets are similarly compounded from asbestos or asbestos-substitute material bonded to steel shim stock.

Valve cover gaskets are made of thick cork, which require re-torquing the valve cover bolts once or twice per year to prevent oil leaks. Most of these early engines required periodic steam cleaning to remove engine grease caused by seeping valve cover, side, cover and oil pan gaskets. Chemical gaskets of the 1950s and 1960s were designed to seal minor surface imperfections and were of the hardening and non-hardening varieties. 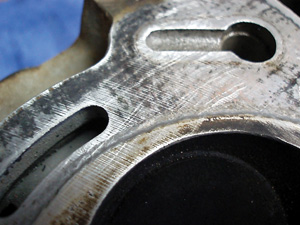 GASKET TECHNOLOGY, 1960
During the 1960s, engines accumulated more accessories like power steering and air conditioning, which made re-torquing cylinder head gaskets less practical due to the lack of accessibility. In response, engineers designed a steel shim cylinder head gasket that required no re-torquing after the initial assembly and that would seal the high-compression engines of that day. Similarly, two-piece neoprene oil seals were introduced to reduce rear main seal oil leakage and one-piece seals to seal the timing cover. Most sealing problems on these heavy cast-iron engines involved leaking valve cover gaskets and the occasional seeping oil pan gasket.

GASKET TECHNOLOGY, 1980
When “bi-metal” engines mating cast-iron cylinder blocks with aluminum cylinder heads were popularly introduced in the 1980s, underhood temperatures increased to more than 230 degrees F. This temperature increase was caused by crowding more emissions and accessory devices under the hood, the lack of air flow around the engine, and by the elevated temperatures required to activate electric cooling fans.

As temperatures increase, aluminum expands 1.5 times more than cast iron. Although the difference in thermal expansion coefficients of bi-metal engines is only a few thousandths of an inch, the cylinder head scrubbing over the cylinder eventually wears out the gasket and the cylinder head-mating surface. To reduce the effects of gasket scrub, a graphite-composite cylinder head gasket was designed that actually lubricates the cylinder head and cylinder block surfaces.

Last, many manufacturers used room temperature vulcanizing (RTV) sealers to seal oil pans, timing covers  and valve train covers during the 1980s. Because the temperature differentials between, let’s say, a valve cover and cylinder head, are so great, the RTV gasket seal would often shear and begin to leak. The success of using RTV sealers depends upon the metal surfaces being free of oil and other contaminants. Since this is rarely the case in production repair shops, aftermarket gasket manufacturers often supply cut gaskets to replace RTV gaskets. In either case, the success of using an RTV or cut gasket depends very much upon the application and installation procedure.

Unfortunately, composite cylinder head gaskets tend to crush when the engine is overheated. Due to this crushing effect, the cylinder head bolts loosen and the gasket begins leaking combustion gases into the cooling system. To combat gasket crush and scrubbing issues with bi-metal engines, the current generation cylinder head gaskets are of a multi-layer steel (MLS) design that incorporates a number of thin steel shims held together by rivets at the corners. Of course, the conventional fire ring is crimped around the steel shims at the cylinder bore to seal combustion gases into the cylinder. Along with improved sealing and reduced gasket wear, the MLS gasket will survive an overheat condition without losing cylinder head bolt torque.

Due to the different thermal expansion coefficients between aluminum oil pans and cast-iron engine blocks, oil sealing technology also has evolved from molded-on-place RTV and cut-cork gaskets to molded synthetic rubber gaskets. Many molded synthetic rubber oil pan gaskets incorporate steel grommets inside the bolt holes to limit the compression of the gasket as the oil pan or cover bolts are tightened. Intake plenum, camshaft cover, timing chain cover gaskets similarly use molded-rubber designs that fit into grooves cast or machined into the metal surface. Graphite-based gaskets and silicone rubber o-rings are used to compensate for thermal expansion differentials between intake manifolds and cylinder heads. Intake gaskets might also incorporate synthetic rubber printed onto the gasket surface to seal coolant and air passages. Last, most crankshaft seals are now very reliable one-piece designs that are pressed or driven into place.

Through the 1950s, ‘60s and ‘70s, aerosol coatings like aluminum paint were routinely used to seal surface imperfections in cast-iron cylinder blocks and heads. Unfortunately, sealants soften as the engine warms up, which relaxes the cylinder head bolt torque on composite gaskets. For this reason, sealants should only be used on graphite-based and MLS cylinder head gaskets as recommended by the gasket manufacturer.
Sealants and adhesives aren’t generally recommended for molded synthetic rubber gaskets because they can attack the chemical structure of the gasket. In other cases, the sealant or adhesive acts as a lubricant, allowing the gasket to slip out of place. RTV sealants are still used to seal corner joints on some engine applications. Anaerobic sealants, which harden in the absence of atmospheric oxygen, are used to seal metal-to-metal surfaces like rear main bearing caps and some flywheel retaining bolts.

“Rubberized” cut cork gaskets found on early engines are especially vulnerable to weather strip and other chemical adhesives. Any adhesive should be applied sparingly as required. Remind your customer that excessive amounts of RTV smeared on engine oil pans and timing covers can often clog oil pump screens and oil drain galleries.

Always recommend an aerosol parts cleaner to remove oil from any surface receiving an RTV or anaerobic gasket seal. All dirt and paint should be removed because either creates an imperfection in the gasket sealing surface. Using a chemical gasket remover to help loosen hardened gaskets is preferable to using abrasive wheels that shed extremely harmful abrasive fibers into an engine’s lubrication system and gouge aluminum sealing surfaces. Above all, carefully read the gasket maker’s instructions before installing the gasket. Acquiring some gasket know-how is always the best way to prevent an expensive oil or coolant leak comeback.