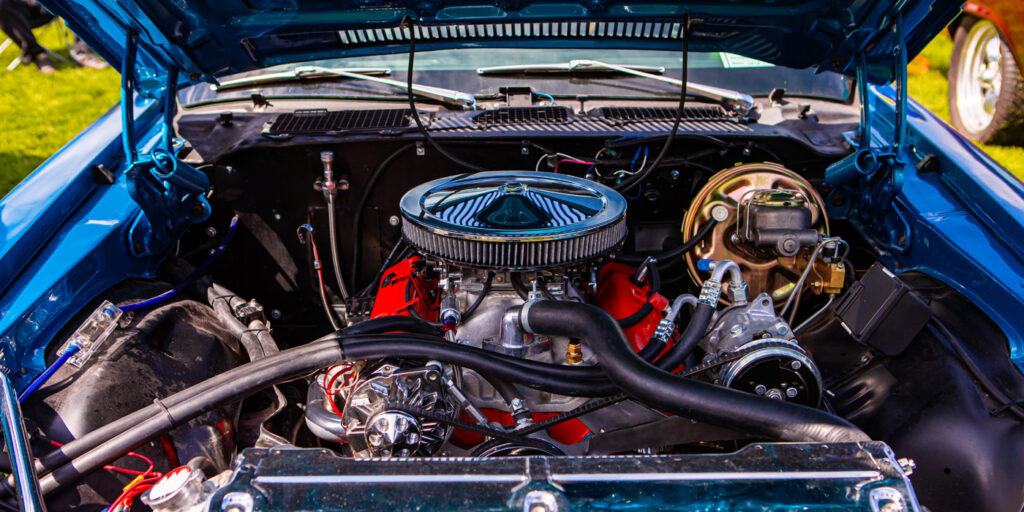 Racing is really about bragging rights and bravado. You either have it or you don’t. I recently discovered a show on the VICE network called “Donkmaster,” about a South Carolina shop owner who builds performance “donks.” What’s a donk, you ask? A donk is a ’71-‘76 Chevy Caprice with giant flashy rims.

The Donkmaster takes it a step further and has a late-model Corvette LS7 engine and drivetrain in his car with a secret combination of turbos, nitrous and tuning. He estimates that he’s put $60,000 into the engine build alone. “Donkmaster” Sage Thomas takes his car to tracks all over the South for grudge-match racing. When he wins a race, he delivers his famous “gap sauce” to his competitor. It’s quite entertaining and fascinating to see what they can do to these cars to make them go fast.

Reality shows aside, performance and racing parts are distinct from their OE counterparts in many ways. For one thing, the parts typically cost more due to the performance factor and the materials used to make them. We recently toured a high-performance diesel manufacturer’s shop where we saw large aluminum blocks whittled down to connecting rods and other small pieces. The owner told us that the blocks alone cost $400 in raw material, so think about what a set of rods would cost (he charges $3,200 for a set of six for a Cummins engine). With parts like these, who needs enemies?

The fun thing about performance parts is there’s something for everyone. Whether your customer is into imports, muscle cars, old-school cool, vintage or late-model muscle, there are performance parts made for nearly any vehicle if you look hard enough. At the beginning of the hot rod industry, racers and builders used to make their own parts. The companies they founded because of their “hobby” are now worth billions of dollars collectively: Vic Edelbrock, Mickey Thompson, Parnelli Jones (US Mags/American Racing Wheels), Tom Lieb (Scat Performance/Scat VW), Ron Coleman (Comp Cams), Ed Iskenderian (Isky Cams) and the list goes on. These pioneers helped pave the way for what we see on the road today.

Today, there’s a kit for everything. There’s a timing kit, head kit, bottom-end kit, stroker kit and complete engine kit. The same goes with suspension. For the people who want to improve the handling of their vehicles or make them off-road-ready (or at least look like it), there’s the lift kit, lowering kit and air-bag kit. It’s almost impossible to order some components without a kit involved.

But kits have made it easier for customers, and retailers, to choose the right combinations of parts for their performance upgrades. Engine kits, for example, can be all over the map and may include parts from multiple manufacturers, so the kit makes it easy to get everything you need. You’ll still need to know the basics such as bore, stroke, journal size and deck height. For head kits, you need to know the valve lift, spring height and pushrod length (for OHV engines).

If you’re selling cylinder heads or stroker cranks to DIYers, it’s in your best interest to sell them a complete kit. With cylinder heads, customers often want to upgrade to better-flowing, lighter aluminum heads. But selling a bare head means you’ll also have to sell everything else, such as the valves, springs, keepers, guides, etc. Complete cylinder heads are more expensive, as they come fully assembled from the manufacturer, but they are practically bolt-on pieces. Stroker kits include the crankshaft, bearings, connecting rods, pistons, rings – the whole rotating assembly is balanced, so your customer can assemble the engine instead of taking all of the extra steps to weigh and fit the pistons and rods.

One of the difficulties in selling performance and racing parts is that they don’t always fit like the OE part. Your customer may have to cut, file or fabricate some part of the vehicle to make the part work as intended. Make sure your customer is aware of the steps necessary to install the part correctly, and you’ll save yourself a lot of headaches later.

As for the reality shows like “Donkmaster,” they drive customers to your counter, so it’s a good thing. I say, keep the shows coming. You could consider showing “Overhaulin’” or MAVTV in your store to connect with performance customers. You also need at least one performance/racing specialist behind the counter to help when the questions get more technical, and to keep you from selling the wrong part for the application. Also, beware of chasing down part numbers and kits for “tire-kickers” who will use them to buy the parts online.