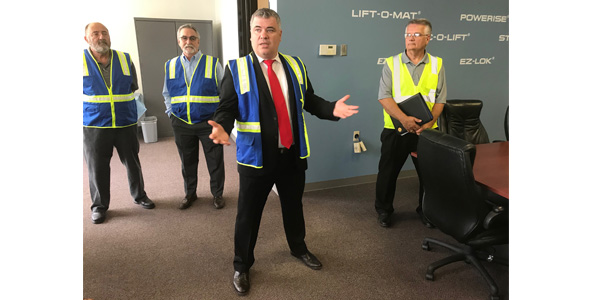 After evaluating several third-party logistics providers, Stabilus chose AEL Span in Belleville, Michigan, to house and operate its distribution center. The facility will offer 2,100 Stabilus part numbers covering 99% of the domestic and import vehicles on North American highways, according to the company.

Gas springs, also known as lift supports, are hydraulic devices that aid in the opening and closing of trunk lids, hoods, hatchbacks and tailgates. They also are used in seats, glove compartments, center consoles and other applications.

“We’re making investments and focusing on building the team and the expertise needed to serve the aftermarket,” Levy told Counterman. “We have a structure in place specifically for independent aftermarket sales. We’re not sharing resources on the sales side or the logistics side – these people are laser-focused on serving customers for the independent aftermarket.”

The car parc is growing and aging – Stabilus sees its sweet spot in vehicles that are five to seven years old – and there’s a “big push” in the aftermarket to purchase OEM-branded or direct-replacement gas springs.

“It’s not a very expensive part, and at the same time, [installers] don’t want people coming back and complaining that it doesn’t have the same fit and function that an OEM part would have on the vehicle,” Levy explained.

The other trend is the popularity of SUVs and trucks in North America. These larger vehicles typically use 20% to 30% more gas springs than cars, according to Levy. “There are vehicles with 47 gas springs on them,” he added.

According to AEL Span Site Manager Tony Porada, the Belleville facility has 22,000 square feet of space dedicated for Stabilus, including eight rows of racking, 720 bays, 2,100 pallet locations and 400 carton locations.

The initiative should get started in the next month or so, noted Anthony Haba, president of Stabilus North America. He emphasized that by this time next year, Stabilus hopes to ramp up to an average annual rate of 2 million gas springs shipped from the distribution center.

“This initiative is all about dominating the aftermarket like we do with the OE business,” Haba said. “For us to do that, we need a partner like AEL Span, and we’re looking forward to [their] excellence in delivery and order fulfillment that we’ll need to be the best in the market for our customers.”

Advertisement
In this article:Lift Supports