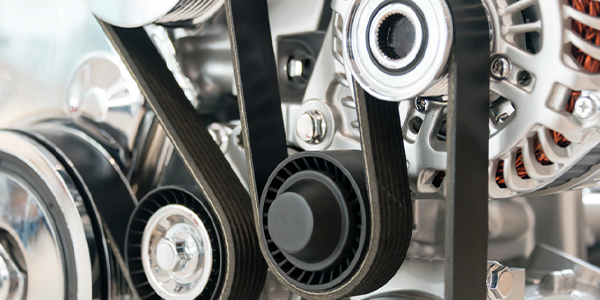 When a belt is squeaking, most vehicle owners know that something might be wrong. The most common solution is to replace the belt, but that rarely stops the noise on its own. When replacing a serpentine belt – especially a squeaking one – it’s also crucial to inspect and replace the automatic belt tensioner and associated pulleys if necessary.

The serpentine belt has been around a long time, making its debut in the 1979 Ford Mustang. They’re used on most late-model vehicles today. Over the years, the belts have improved and last longer, but the automatic tensioner has mostly maintained the same design since the beginning.

Automatic belt tensioners play an essential role in the accessory-drive system. A damper inside the tensioner provides the correct amount of belt tension, absorbs vibrations from the engine and reduces noise from a slipping or worn belt. Excessive oscillation is a symptom of damper failure as well as spring fatigue, but also could be an indication of a faulty component somewhere in the accessory-drive system.

Serpentine belts can be difficult to replace because of how they’re routed, and due to limited access to a cramped engine bay. While most late-model belt-drive systems use a single belt, some applications may use a separate belt for accessories such as the A/C compressor or power-steering pump. Also caution customers that some applications use a different type of belt altogether, called a “stretch-fit” belt, which is not adjustable.

A stretch belt uses materials that allow it to be installed onto a fixed-drive system and provides enough “self-tension” to maintain proper belt tension without the need for an automatic tensioner.

Belt slip and noise can occur when the V-ribs on the underside of a serpentine belt become worn. Technicians use a belt-wear gauge tool to measure the depth of the grooves in the belt because it’s hard to see with the naked eye.

Idler-pulley misalignment also can create noise. Most idler bearings are sealed and cannot be oiled. If an idler pulley is noisy or wobbling, it needs to be replaced.

Many belt-drive systems today use decoupling pulleys to further reduce noise and vibration. However, complaints of belt noise remain the most common reason for replacing a belt. Don’t forget to remind your customers to check the tensioner and pulleys while they’re at it.