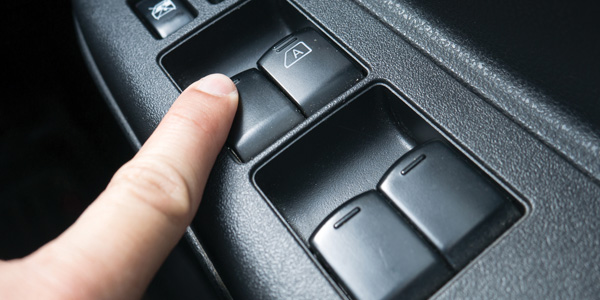 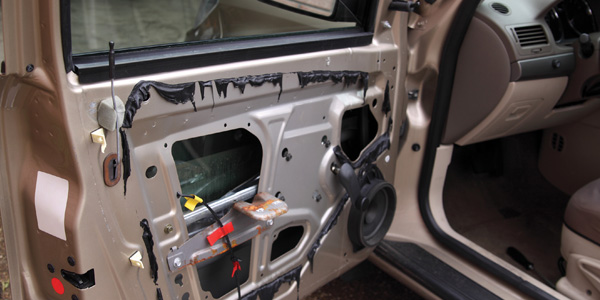 Most vehicles today have power windows, the only exceptions being a few stripped-down economy models such as the Ford Fiesta S, Nissan Versa S, Chevy Sonic LS and Kia Rio LX. Power windows raise and lower the side windows with a touch of a button. We love them as long as they are working correctly. But if they are not working, they can be a real pain – especially if you are in a fast food drive-thru lane or pull up to an ATM machine.

The drive mechanism that raises and lowers power windows is connected to a small electric motor and gearbox (the window regulator). Moving the control switch on the door to the up or down position sends a command signal to a power window module or body control module on most late-model vehicles. The module then energizes the window regulator so it will raise or lower the window. On older vehicles, the window button is wired directly to the regulator and completes a circuit that makes the motor spin one way or the other to raise or lower the window.

On newer applications with control modules, the module needs to know the window’s position so it can stop the window at the correct point in its travel. Some cars lower the window slightly when a door is opened, then raise it back up for a tight seal after the door is closed. A position sensor in the regulator supplies the position signal.

If a power window does not respond when the button is pushed, the problem could be a bad switch, a bad regulator, a broken lift mechanism, a wiring fault between the switch and module or regulator, or a blown fuse.

The easiest thing to check first is the fuse. Locate the fuse panel or power center when the fuse for the power window circuit is located. If the fuse has blown, the power windows may have experienced a momentary overload. This can happen during winter weather if a window is frozen with ice, or if something jams or blocks a window as it is trying to close or open. If a new fuse does not correct the problem, the problem is a bad module, wiring fault regulator or window mechanism.

Accessing a window regulator and the mechanism inside the door requires removing the inner door panel. This, in turn, usually requires some special door panel removal tools to release the clips that hold the panel in place. The clips are often plastic and are easily broken, so your customer may need some replacement clips.

The wiring for the power windows passes through grommets in the door and door jam. Opening and closing the door flexes the wiring and grommets, and after many such cycles some of the wires may break or short out.

If a power window is not moving but the regulator makes a buzzing sound when the switch is pressed, the window mechanism may be broken. Some vehicles use rather flimsy perforated plastic strips to move the window. Cold weather can make the strips brittle and cause them to break, especially if the mechanism is overloaded because a window is frozen shut. On applications that use a steel cable to move the window, the cable may have come loose or broken. With gear drives, the gear teeth may be stripped. Windows can also come off their guide tracks if the plastic slides become worn or break.