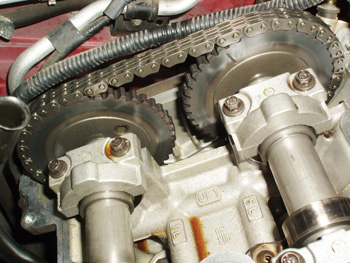 Because valve train timing repairs are becoming a primary part of your professional technician’s engine service market, it’s important to understand the basics of valve train timing. To illustrate, the camshaft controls the opening and closing events of the intake and exhaust valves in most four-cycle gasoline engines. The camshaft drive sprocket contains twice as many teeth as the crankshaft sprocket, which allows the camshaft to rotate at one-half crankshaft speed.

This gearing ratio allows the intake and compression strokes to occur on the first crankshaft rotation and the power and exhaust strokes to occur on the second rotation. A balance shaft might also be included in the valve train timing assembly to dampen engine vibration or an auxiliary shaft to drive the oil pump and distributor. Since the intake or exhaust valves can collide with the pistons when a timing belt or chain fails, it’s important to ensure a professional repair by selling timing gears, chains, or belts as complete replacement sets.

Timing belts
Rubber timing belts have dominated the valve train timing market since they were popularly introduced on domestic vehicles in the 1980s. Due to the use of modern, crack-resistant EPDM rubber, visual inspections aren’t indicative of imminent failure. To ensure reliability, timing belts should be replaced according to the automaker’s recommended service intervals. While recommended replacement intervals on older applications often begin at 60,000 miles, that interval has generally been increased to 100,000 miles unless otherwise stated in the owner’s manual or professional service literature. To increase reliability, timing and balance shaft belts are generally sold as sets, complete with idler pulleys, and (if driven by the timing belt) a new water pump as well.