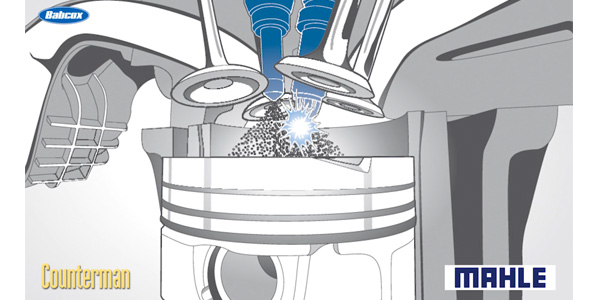 This video is sponsored by MAHLE.

So what is it? Low-speed pre-ignition, or LSPI, is a problem that’s unique to the engines that I just mentioned. In the industry parlance, LSPI is an “abnormal combustion event” that occurs at low speeds when the engine is heavily loaded during wide-open throttle. Tiny droplets of oil mix with fuel in the combustion chamber and prematurely ignite before the spark plug fires.  When this happens, you get uncontrolled combustion that hammers down on the piston with massive spikes in cylinder pressure.

The milder effects of LSPI are engine noise or rough idle. But LSPI also has the potential to cause broken spark plugs and cracked pistons, and severe damage that can prematurely ruin an engine.

Low-speed pre-ignition is very much on the radar of the automakers and oil manufacturers. The OEMs have asked the American Petroleum Institute to issue a supplemental engine-oil category called SN Plus, which is specifically designed to prevent low-speed pre-ignition. Some oil manufacturers are producing engine oil that complies with the SN Plus specifications, which is designated on the API donut on the bottle. Also, you have automakers like GM developing their own oil specs to reduce incidents of LSPI. GM’s oil spec is called Dexos 1 Gen 2.

So what does this all mean for your customers? Well, if they’re driving a turbocharged direct-injected vehicle and they use an SN oil for an engine that requires SN Plus, they’re putting themselves at risk of being stranded on the side of the road with an engine that needs to be replaced. Here’s the bottom line: Now, more than ever, it’s critical that your customers use an engine oil that’s recommended by the vehicle manufacturer. And, of course, you always want to recommend a high-quality oil filter that can handle the extreme operating conditions and extended service intervals in today’s vehicles.

WATCH: What Is Low-Speed Pre-Ignition?