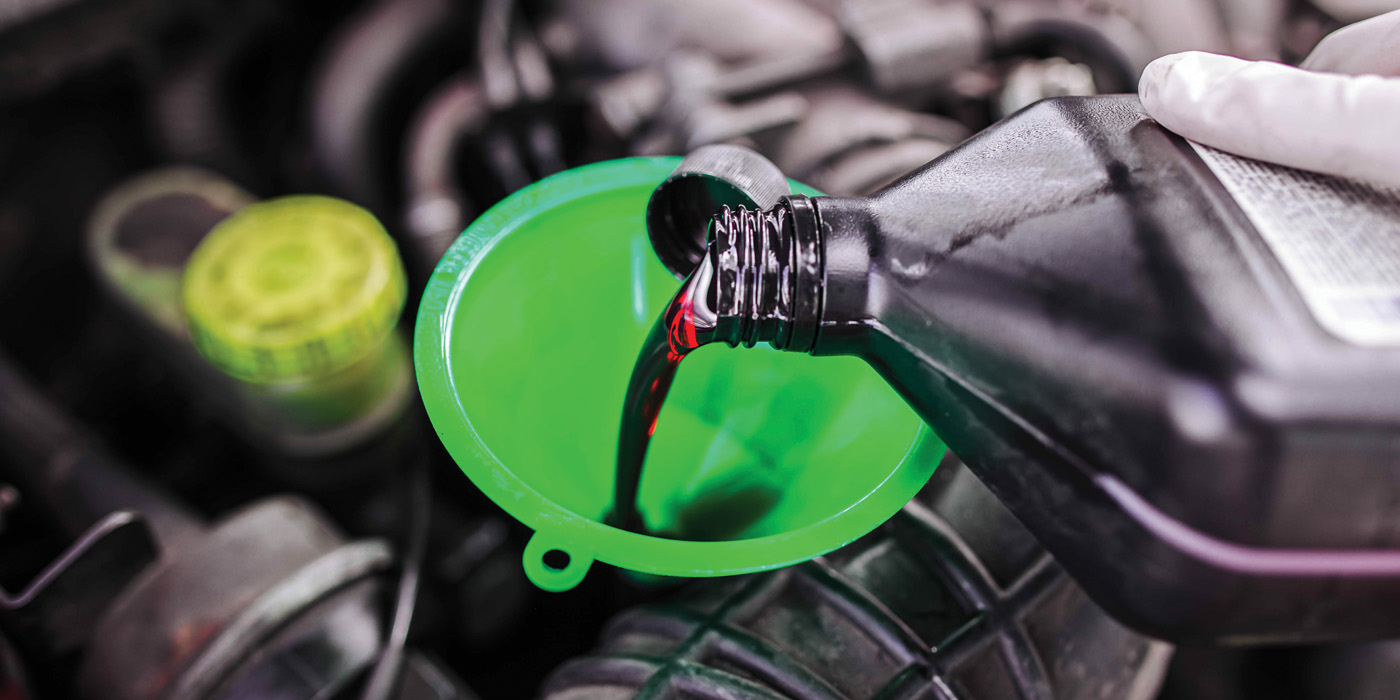 Functional fluids come in
many forms, and each one has very
specific properties and applications.

Functional automotive fluids make up a broad category, with a wide range of very specialized and unique applications. Some of the most diverse are transmission, power-steering and brake fluids, along with a wide array of coolant types. At their most basic, each of these fluids is a lubricant, coolant, hydraulic medium or a combination of these functions.

With so many individual fluid types on the market today (and many of those being specific to a single OEM), it can be a real challenge to identify and recommend the proper fluids for each application.

Just as individual engines within an OEM’s lineup may require different viscosities and formulations of motor oil for maximum performance, transmission-fluid specifications can vary from transmission to transmission within that same product line. With multiple vendors supplying transmissions to each OEM for different models, fluid choices also multiply.

In my early years behind the counter, Dexron/Mercon fluids covered pretty much every GM, Ford and most imported vehicles that we encountered. Today, I need to carry several specific fluids for each marque to have coverage, or rely on one or more of the “universal” fluids available from my vendors. The only thing modern transmission fluids have in common is that they’re red … well, most of them!

Any “multi-vehicle” fluid should be thoroughly researched before recommending or selling these products to your customers. Reputable fluid manufacturers will clearly state which specifications their products meet, either through a technical data sheet or spelled out on the container itself. If you’re in doubt about a particular fluid’s compatibility, recommend another fluid that clearly meets the specification, or direct your customer to the OEM for the correct fluid.

Power-steering fluid shares many characteristics with ATF. Hydraulic pressure is created by circulating an oil-based fluid throughout each system, with that fluid lubricating moving parts and carrying heat away to a cooler, then repeating the cycle again. Some OEMs even fill their power-steering systems with ATF.

Dexron/Mercon fluids are common recommendations among Asian manufacturers that don’t specify a dedicated steering fluid. Honda/Acura specifies a very particular fluid, although it’s readily available in the aftermarket. ATF also is the preferred choice for many Ford and Chrysler products.

When other fluids fail, a vehicle tends to slow down or shut off. That’s not the case with brake-fluid failure. Brake fluid might be one of the most critical functional fluids in any vehicle system. Essentially a hydraulic fluid, its primary role is to transfer force applied at the pedal to the caliper or cylinder at the wheel.

Commonly known by its DOT number, the most common fluids are DOT 3 and DOT 4. Each DOT category has specific properties, but the main differences are their boiling point and their tendency to absorb water. A freshly opened container of DOT 3 fluid has a dry boiling point of 205° C, which slowly decreases as it naturally absorbs moisture. DOT 4 has a higher dry boiling point (230° C) and absorbs water more slowly than DOT 3, but that boiling point is more drastically reduced as it absorbs water from the environment.

In other words, DOT 4 is more stable under higher temperatures, until it takes on too much moisture. Exposed to intense brake heat, this moisture can become vaporized, reducing the effectiveness of the brake fluid as a hydraulic force, and causing soft pedal feel. DOT 3 and DOT 4 are chemically compatible, but adding DOT 3 to a system containing DOT 4 will reduce the boiling point, and likely absorb moisture more quickly.

Opened brake-fluid containers should be used within a few months or discarded according to local regulations. DOT 5 is a silicone-based fluid often used in motorcycles and racing vehicles, but it is NOT compatible with glycol-based DOT 3 or DOT 4 fluids, and should not be used in vehicles with ABS brake systems. As with most functional fluids, it’s best to follow the manufacturer’s recommendations when selecting a suitable replacement.

DOT 3 and DOT 4 fluids also are commonly used in hydraulic clutch-control assemblies, although some manufacturers use synthetic hydraulic fluids for actuating clutches, convertible tops and other various systems.

The last fluid in our overview is almost as diverse as transmission fluid, and equally confusing: coolant! With a literal rainbow of colors, and a half-dozen kinds of chemical-corrosion inhibitors, the world of coolant has moved well-beyond the bright green fluid that most people imagine when they think of “antifreeze.”

Although this fluid plays an important role in preventing the cooling system from turning into an automotive iceberg, its primary function is to transfer heat away from the engine. When water is mixed 50/50 with coolant, the freezing temperature of the mixture is lower than either ingredient on its own!

Water has excellent cooling properties, but offers no corrosion protection to the various metals found in your cooling system. Modern coolants contain corrosion inhibitors, but vehicle manufacturers use different inhibitors to protect the cooling systems that they have designed. This is where the confusion begins, because these inhibitors don’t all protect the same metals, they don’t always “play well with others” if they are mixed, and they have different lifespans.

Inorganic additives such as phosphates and silicates are found in conventional “green antifreeze” (IAT coolant), and these coolants offer excellent corrosion protection, but a much shorter service life than coolants with organic-acid-inhibitor technologies (OAT). OAT coolants such as Dex-Cool usually advertise a five-year service life, and rely on organic acids to slow corrosion, but don’t effectively protect copper and brass components. Organic acids don’t bond as strongly with these metals as they do with aluminum, leaving them unprotected. Using OAT coolants in older vehicles may be counterproductive, as these metals were widely used in older cooling systems.

HOAT (hybrid OAT) coolants contain both organic and inorganic additives, but HOAT coolants don’t mix well with either IAT or OAT coolants due to the differences in the actual additives used in each formula.

HOAT coolants are known as “10-year” coolants. These are often marketed as G5, G11 and G12 coolants. Some Asian manufacturers specify a phosphate hybrid OAT (PHOAT), which replaces inorganic silicates with phosphates, but is still considered a hybrid organic coolant. The Germans seem to favor a silicate-based OAT additive package, commonly found in coolants marketed as Si-OATs. Finally, select European marques feature a coolant known as G48, which is an OAT with a formula free of nitrates and phosphates.

OEM-type coolants often are recognized by their distinctive colors, but these dyes are the least important chemicals in the mixture. When a customer requests coolant by color, our first question should be about the vehicle application. Universal long-life coolants (which often are pale green or yellow OAT formulas) also should be selected for their compatibility with the actual chemistry of the existing coolant, rather than their color. Functional fluids come in many forms, and each one has very specific properties and applications. Quality, color and compatibility often play a role in how our customers choose these products. Our role should be to help those customers select functional fluids that are, in a word, functional!

Advertisement
In this article:Coolant, Fluids