I’ll begin this month’s Mechanic Connection with a case study. Because of warranty concerns surrounding a newly-installed fuel pump on his wife’s ’98 Jeep Wrangler, a customer was referred to me by my local parts jobber. The man’s original concern was that the Jeep was starting rather slowly because “it isn’t getting enough fuel.” Because his small contracting business was seasonally busy, the man had a local repair shop replace the fuel pump.

A few days after the fuel pump replacement, the wife discovered that her Jeep had a dead battery. So the contractor places the battery on a slow charge and returns at lunch time only to find that the battery is still dead. In frustration, he turns his commercial-grade battery charger on a high-boost charging setting with no result. After replacing the battery, he still can’t get the Jeep to start. 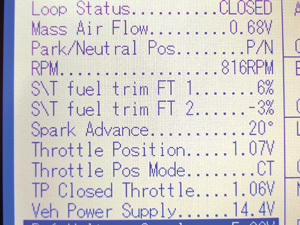 His next step is to remove and inspect the new fuel pump. He then decides the fuel pump is defective and wants the jobber to warranty the fuel pump. At that point, my jobber referred his customer and his problem to me.

HOW COMPUTERS WORK
To many amateur mechanics, an automotive computer is a “black box” that mysteriously controls all of the engine functions. In reality, an automotive computer or powertrain control module (PCM) is an information processor that turns electrical inputs from system sensors into electrical outputs into system actuators. As with any computer, the PCM uses a binary code to execute complicated math formulas programmed into its read-only memory.

The PCM also activates the in-tank fuel pump for a few seconds during cranking to pressurize the fuel system. As the engine is cranked, the PCM receives a signal from the crankshaft position sensor indicating cranking speed. When the cranking speed exceeds approximately 200 rpm, the PCM re-activates the fuel pump to supply fuel to the engine. At this point, the PCM turns on actuators like the ignition coils and fuel injectors to start the engine and begin operating in an open-loop mode.

As soon as the oxygen sensors located in the exhaust system start producing a signal, the PCM switches into the closed-loop mode, which means that it is now adjusting fuel delivery, spark advance, and idle speed to meet various operating conditions. The PCM also begins running a series of tests on emissions system actuator components to see if they are working. If the PCM finds an emissions-related failure in any powertrain system, it turns on the “check engine” light.

HOW COMPUTERS ARE TESTED
Returning to our case study, it didn’t take much testing to suspect that the PCM on the Jeep Wrangler wasn’t working. First, the orange “check engine” light didn’t momentarily illuminate as it should when I turned on the ignition. Second, my scan tool wouldn’t communicate with the PCM.

Automotive computers are generally tested by the process of elimination. The first step is to eliminate the possibility of faulty power supply and ground connections. Most PCMs have at least one terminal that’s constantly connected to B+ or battery positive and another that receives key-on voltage from the ignition switch. Most also have two redundant ground connections to B- or battery negative.

To find corroded connections, blown fuses or burned fusible links in the electrical system, I began testing each fuse with a volt meter. During testing, I found that the PCM fuse supplying the PCM key-on voltage was burned out. Unfortunately, replacing the fuse didn’t restore scan tool communications with the PCM, so I confirmed B+ voltage at the PCM’s battery terminal and key-on voltage at the PCM’s ignition terminal. I also load-tested the PCM’s two ground wires just to verify a good connection with battery negative.

HOW COMPUTERS FAIL
Most automotive electronic parts rebuilders claim that the majority of PCMs returned under warranty are in perfectly good operating condition. The fact is that, while they’re blamed for many “mysterious” system malfunctions, most modern, post-1996 on-board diagnostics II (OBD II) PCMs are very reliable.

Going back to the original complaint of slow starting, I suspected that the original battery had developed a weak cell, which caused hard starting by erasing the adaptive memory in the PCM during cranking. Of course, low voltage during cranking might also shut off the PCM. So the initial slow starting complaint could have been caused, not by a bad fuel pump, but by a bad battery.

Why did the PCM fail? Let’s go back to the fact that the Jeep’s owner also runs a small construction company and that his battery charger probably is a high-amperage unit designed to start heavy-duty diesel trucks. It might also be an older battery charger that will charge well over the 17-volt limit for modern vehicles with on-board electronics.

When the owner turned his battery charger on high boost, the charging voltage probably spiked well beyond the 17-volt rule of thumb. While most modern PCMs automatically deactivate the alternator in an over-voltage situation, none can withstand exposure to more than 18-20 volts from an over-boost on a battery charger. Could the owner also have ruined the PCM by reversing the polarity on the battery charger? Perhaps, and that’s why many auto manufacturers recommend removing the battery for recharging.

I also tested the lighting and the electrical and electronic components in the system for damage. Fortunately, the scan tool would communicate with the air bag module, which was the only other electronic control module included on this otherwise Plain Jane Jeep. All other accessories, including lights, radio, and windshield wipers worked properly.

THE ROOT CAUSE OF FAILURE
It’s always important to determine why the old PCM failed. In some cases, shorted actuators like fuel injectors or ignition coils can burn out the injector or coil driver on some older OBD I computer designs. Although most OBD II PCMs protect their circuits from shorted actuators and other electrical overloads, the PCM can also be ruined by something like a leaking windshield seal dripping water into its case. Consequently, most rebuilders want their installers to explain why the unit is being replaced so the returned core can be accurately diagnosed and repaired.

When replacing a PCM, it’s the installer’s responsibility to inspect the harness connectors for signs of corrosion or mechanical damage. It’s also important not to touch the PCM’s connector pins because the human body can transmit enough static electricity to degrade an interior component. In most cases, it’s also recommended that the battery negative cable be disconnected before removing and replacing the PCM. Last, it’s important to install the PCM in its original mounting to eliminate vibration as a future cause of failure.

When selling an OBD computer, don’t forget that most post-1996 PCMs require “reflashing” to allow the PCM to communicate with other on-board computers and modules. Most aftermarket reman PCMs can be programmed by the rebuilder or stocking warehouse to conform to the vehicle identification number (VIN) application.

After the new PCM is installed, it’s always important to test engine functions such as fuel delivery and ignition to ensure that all of the sensors and actuators are operating as designed. Some scan tools, for example, feature bi-directional controls that allow the technician to activate the ignition, fuel injection, fuel pump and other actuators for testing purposes. Another quick check is to verify that the vehicle has the correct PCM by using the scan tool to read either the VIN or the calibration number of the PCM.

In the case of the 1998 Jeep Wrangler, all parameters checked out as they should, so the Jeep with the “failing fuel pump” was ready for delivery.

How Automotive Computers Work and How They Fail