Motor mounts serve an important function: they support the weight of the engine and transaxle (or transmission), and also isolate engine vibration from the rest of the chassis. With so much emphasis on controlling noise, vibration and harshness in late-model luxury vehicles, a growing number of late-model vehicles are now equipped with some type of electronic mounts. 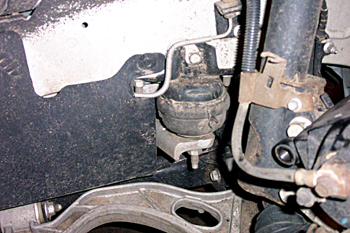 For many years, automakers relied on solid rubber motor mounts to support the engine. The natural flexibility in rubber allows the mounts to absorb vibration. But if the rubber is too compliant, the engine may experience excessive motion under load that could stress and crack exhaust pipes and connections. And with such tight clearances under the hood, there’s a risk of something rubbing against something else and causing additional noise or problems. Consequently, mounts have to be relatively stiff to limit compliance so the engine does not rock excessively under load.

Engine vibration is usually most noticeable when the engine is idling, especially if the engine has an odd-fire configuration as some V6 engines do. Four-cylinder engines as well as diesels can also produce a lot of vibration at idle. Vibrations can be amplified even more when a high-load belt-driven accessory such as the A/C compressor is engaged while the engine is idling.

In the 1980s, some carmakers began using “hydromounts” that have a fluid-filled cavity. The extra cushion provided by the glycol fluid chamber allows the mounts to absorb and dampen engine vibrations that would otherwise pass through the mount to the body. The only drawbacks with hydromounts is that they are more expensive than solid rubber mounts, and they can crack, leak and collapse after years of service.

In recent years, “active” motor mounts have appeared on some vehicles. These are electronic motor mounts that are capable of changing their dampening characteristics with engine speed and load. Such a mount can be relatively soft at idle to absorb the unwanted shakes produced by widely or unevenly spaced cylinder firings, then stiffen up at higher engine speeds and loads to limit unwanted engine motions. The mount is controlled by the powertrain control module (PCM) based on inputs from other vehicle sensors. Active mounts can be found on a number of late-model vehicles including Honda, Hyundai, Jaguar, Lexus Toyota and others.

On 2005 to 2008 Toyota Camry V6 models, for example, a vacuum-actuated “Active Control Engine Mount” (ACM) system is used. The front engine mount has a hollow chamber inside that allows the stiffness of the mount to change when vacuum is applied. A duty cycle Vacuum Switching Valve (VSV) on the outside of the mount is controlled by the powertrain control module.

When the engine is idling, the PCM completes the ground circuit to the VSV solenoid, allowing intake vacuum to be applied to the mount. This makes the mount more compliant and allows it to absorb more vibration and shake. At higher engine speeds, the PCM reduces the frequency of the pulse signal to the VSV to gradually increase the stiffness of the mount to match engine speed.

On this system, a noticeable increase in engine vibration can occur if the active mount leaks vacuum, if the hose connections leak vacuum (or are obstructed), or if there is a problem with the control valve, wiring harness or PCM.

On a 2008 Lexus ES350, an even more advanced engine mount system is used. The Lexus Active Control Engine Mount system has an active mount that can generate its own counter-vibrations to offset engine vibrations. The system has its own computer and an acceleration sensor located on the front of the engine to monitor engine shake. The control unit then energizes the actuator inside the active mount to generate a counter shake that reduces the intensity of the engine vibration.

As for replacing active mounts with solid mounts, it is possible but the advantages of the active mount system are lost if they are replaced with a conventional solid mount. A related product that is often overlooked when replacing old motor mounts are engine ground straps. These connect the engine electrically to the body and chassis. If the old straps are corroded, broken or missing, the vehicle may experience electrolysis corrosion in the cooling system, charging problems and other electrical problems.